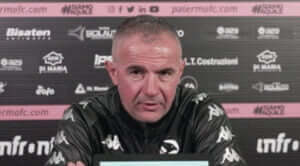 Coach Filippi before the 19th match against the Bari

Giacomo Filippi presents the last match of the first round, the most important: the one with the leader’s Bari. A fundamental match for Palermo, followed by the red and white in the standings, currently with eight points ahead.

We have to cover the signs of the derby, overcoming it. Because we wanted so much, but the positive thing is that immediately after there is a cartel match and we must be ready to fight against the top of the class.

Bari is first in merit, they are a strong team. They also have a coach who knows how to make him play very well. We have prepared it well and we want to put a spoke in the wheel “. “We play to win: it is a match that matters a lot if we want to aim for what we have set ourselves. They will not take a walk, we will give everything. Then, the camp will speak and tell if they are right or us.

Is it necessary to improve the development of the game? I disagree, we did a great performance. We must remain constant, the same game must remain.

So many red cards? Definitely a negative note, we have been remarking it for times with the boys. It is an aspect that needs to be improved, we work on it by acting on our heads and talking to the players: it is the best way. There is little we can do about the two reds from Catania, they were caused by adrenaline and provocations. But we were wrong.

Valente today was not in full shape, we will evaluate whether to call him or not. Buttaro is a solution on the right, but so is Accardi.

The derby would have been fundamental because it affected many factors, especially the mental one because it led us to the match against Bari. For the purposes of the classification, all matches are important, but none are decisive.

I don’t think about losing, I only think if we win. The prospect if we were to lose, I would think about it only in the post-game. But even by winning against Bari, with the strongest in the group, our ambitions do not change. We would certainly go to cancel the derby and immediately project ourselves to the next one, to get away from the Christmas holidays.

Floriano is training very well, he is motivated. When you meet your former team you want to show off. The same for Perrotta, so both will be in the game.

VIDEO / Coach Filippi before the 19th match against the Bari

Here are the probable formations of Palermo – Bari, match valid for the 19th day of the Serie C 2021/22 (appointment Sunday 19 December, at 2.30 pm, “Renzo Barbera” stadium in Palermo):

Giacomo Filippi should change form in the super match against Bari.
The coach, in fact, given also the important absences could field a 3-4-1-2 and abandon, for the moment, the 3-5-2 seen in the last few days.

DEFENSE: in goal Pelagotti is confirmed, as well as Buttaro on the center-right and Marconi as the central pivot. On the center-left, however, there could be the return of Perrotta from the first minute in place of Crivello, owner in the derby.

MIDFIELD: Accardi goes towards confirmation as a right-winger, even if Doda retains some chances to play. On the left-wing, however, the only one available is Crivello, given the forfeit of Valente and Giron. In the event of a four-man deployment, the two midfielders should be De Rose and Dall’Oglio, with Odjer initially on the bench.

ATTACK: many innovations in this department, starting from the positions on the pitch. We are moving towards the inclusion of a playmaker, who should be Silipo. Brunori is untouchable and Fella could return alongside him, with Soleri on the bench ready to take over from the race in progress.