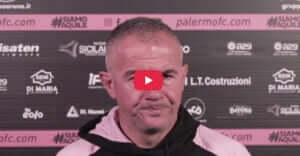 Coach Filippi before the 20th match against the Latina

The Palermo coach, who spoke at the press conference, focuses only on the first match of the second round and warns everyone: it is a very delicate match and we must not think about the classification.
The coach also announces several absences, due to injuries, but is not unbalanced on the formation.

Against Bari, we had to redeem the derby and it was done; we played an excellent match. With the Latina there is some absence of physical nature: Valente has not recovered, Marconi has physical problems, Doda will not be called up. Giron comes with us, he’s fine. We know it will be a difficult race, we are ready to do an excellent performance

It is physiological that some players have a decline in performance, it is normal. We need to get the best out of us for this match and then catch our breath and start again next year.

We have ‘fenced off’ the most important match, in Catania, but against Bari, I saw an excellent team that could have won. I asked my players to be incisive and aggressive; we can all play and fight. I am only thinking of Latina, which is a very important match; we must continue to remain attached to Bari to continue our journey. Surrender by the group? Absolutely not. We play game after game, the ranking is well defined but we want to improve it and aim to undermine the first place.

Bari has eight points ahead of Palermo and evidently deserves them. We want to correct what was done less well in the first round. We are dwelling on the standings without talking about Latina, which is a strong team and will give us a hard time. The boys and I are very focused on the match, the match against Bari is over now.

The fan would always like to see their team at the top, it’s normal. Then we need to analyze many internal dynamics and events. I don’t feel like saying that the criticisms are ungenerous, the team is doing their best to get as high as possible

Soleri and Brunori together? They can coexist, absolutely yes, they are complementary players. They are two guys who have an excellent relationship off the pitch

With the Latina is a very delicate match. We will decide whether to play with the trocar or the three midfielders, we can opt for either solution.

VIDEO / Coach Filippi before the 20th match against the Latina

FORMATIONS / Coach Filippi before the 20th match against the Latina

Here are the probable formations of Latina – Palermo, match valid for the 20th day of Serie C 2021/22 (appointment Wednesday 22 December, at 18.00, “Domenico Francioni” stadium in Latina):

PreviousHighlights Palermo-Bari 0-0, the first part of this season ended without successNextHighlights Latina Palermo 1-0, the last (lost) match of this year
Back to top