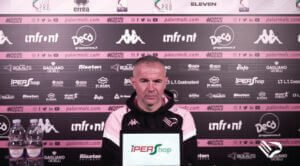 Coach Filippi before the 18th match, the derby against Catania

At the “Massimino” in Catania, Sunday 12 December starting at 2.30 pm, the Derby di Sicilia will be played between the Etna club and the Rosanero. Coach Filippi spoke at the press conference:

“It is from there that I began the adventure with Palermo, an adventure that started well. What remains in the memory is a beautiful memory. We must do everything to ensure that tomorrow we return to Catania to offer performance like last season and to give a strong signal to this championship.

To do this, however, you will need the best Palermo and that everyone gives 120%. We will also need an extra weapon which is pride, the players and staff are to be praised for how they are working in these conditions.

Filippi continued in the press room, also explaining what one experiences off the pitch in view of the Derby: “Surely the emotional aspect is part of him, but it is not certain that he does it in a positive way. Sometimes it can arouse a ‘negative’ effect, in the sense that too much emotion can betray you and make you play tricks. Many players hear this game and these things have to be evaluated.

The players must be good at making sure that the emotion becomes positive energy, an added value, and that it is not a handicap. An aspect on which we worked a lot during the week and it is the thing that I am most concerned with in tomorrow’s performance, I want the utmost clarity in separating things.

Mine was an impromptu journey, but in these situations – says Filippi at the conference – I bring out the best in me and adapt immediately without being cornered. In these farms we have gained experience and awareness together with the staff, we have integrated with the team and we are working very well.

Now, this is where we have to make a strong impact, I’m talking about staff. My and our path has been progressive, so we must continue to grow. Regarding the presence of the fans at the “Massimino” stadium, Filippi admitted: “I would always prefer that the stands were always crowded, but to give these provisions it means that they have their reasons. By now, many initiatives have been taken to ease the tension a little.

It is always a derby and it is right to have parochialism, but it would have been nice to see the stands full and with both fans. A derby that I remember in particular? Those in Serie A remain more impressed, but also those in B. I don’t have one in particular, because they are exciting and full of goals with 30,000 lost in the stands.

On the players who will take the field tomorrow, the Rosanero coach expressed his opinion: “Moro is an overflowing player, really strong who is doing really well, he makes the team play well too, but it’s not just him. Catania is a high-level team, it’s not just him.

It is a team that is playing very well despite the difficulties, so we have prepared the game to face Etna and not Moro. From the former Oglio on duty? He is one of those players who must be careful not to get too caught up in emotions, who can be there but it doesn’t have to happen to him. If he were to play he must concentrate only on the game without losing.

VIDEO / Coach Filippi before the 18th match, the derby against Catania

Here are the probable formations of the 18th match, the derby against Catania.
Catania vs Palermo, appointment Sunday 12 December, at 2.30 pm, “Angelo Massimino” stadium in Catania: