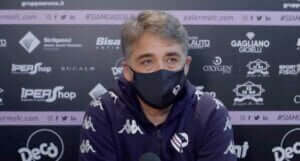 Boscaglia: “That was not our ranking before. This is the right path, it is not a victory that gives oxygen, but we must also know and we know that this ranking is normal for Palermo.
We have not done anything exceptional, we still have to resort and the next one at home is difficult but it is within our reach if we drive with this competitive fury to snatch points from our opponents. This is the path we have taken and it is the best way to score points, but that was not our ranking.

The match must be judged in the 90’s, not only in the first or second half. Suffering from the Paganese can be there, especially for a team that came from our problems.

The covid killed us, we had many players who didn’t have the 90 ‘on their legs. Who we let in, also risks because he only did 2 workouts.”

Rauti: “I don’t feel like a pillar. An honor to play here. I’m a boy who still has to learn a lot, even today I had to manage many situations better.
I have to grow and improve and here I have everything to do it. For me, it is an honor to play here “.

I am finding myself well as an attacking midfielder, I am at the service of my teammates and the coach, I am young and I am very trusting the staff and the most experienced forwards. I’m also having some results, the important thing is head down and pedal.

We had a difficult start for many situations, now having brought home seven points in the last 3 is an important thing but leave the time you find because there are so many games missing and there will be many in a month.

In the bad luck of Covid I was lucky, I’m enjoying this but surely now that we have won the last two it is much better. It is also a special dedication to our missing fans.

There was also a drop towards the end today also for all the close matches, but it is the attitude that makes the difference. The physical difficulties are certainly overcome by the attitude”.

Palermo got a taste for it and after the away win against Juve Stabia, today they gave themselves an encore, beating Paganese 2-1 at Barbera. Another three points of gold for the rosanero team able to score two goals already in the first half with Rauti and Saraniti. In the second half, the goal of Paganese with Schiavino gave the Sicilians the chills but they kept the ball in the game, despite the fatigue was starting to be felt.

The Palermo therefore in the space of six days conquers seven points and begins to climb the rankings that game after the game becomes more and more interesting. Today’s match at Barbera confirmed that this team can have its say in this championship: in the first half, the men from Boscaglia were good and concrete, with Kanoute increasingly on the ball and Saraniti now the leader of the offensive department. And then the mentality,

But this Palermo also has quality, with Rauti who is now becoming essential for this team and Kanoute increasingly slippery and useful also in terms of containment. And then there is a solid midfield with Martin putting order and reasoning in a department that until a few weeks ago had more holes than Swiss cheese. A painful victory today, but there it is, Palermo begins to feel the weight of fatigue linked to close matches, and the decline has already happened against Catania and Juve Stabia comes above all in the second half.

The defense that contained the lively Paganese in the second half also did well. Another three points in the farmhouse, another match to be recovered on Wednesday, the one against Potenza.

Have a look at the Highlights