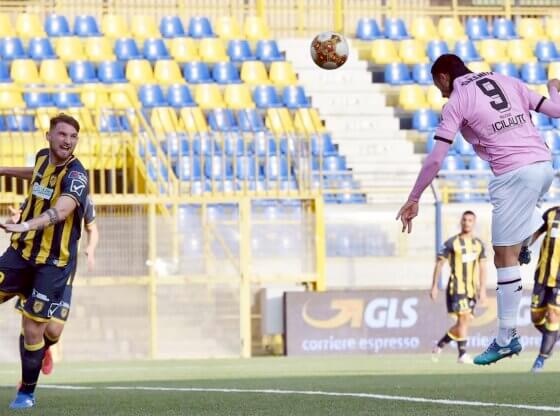 Palermo’s first victory of the championship and away!

At the end of this article you can watch the highlights!

The rosanero, returning from an excellent moment of form after the two draws somewhat conditioned by the referee whistles, will want to confirm the good things that have been seen in recent weeks. But they will have to do it, obtaining the first 3 points of the season which would allow them to move the ranking a little and give awareness in view of recoveries (3 games to be recovered).

The match starts in the best possible way for the rosanero: the phrasing between Martin and Broh on the trocar leads to the exhaust for the rushing Kanoute who calibrates a cross with the tachometer for Saraniti’s head, the Palermo center forward uncorks his season by goring in suspension on the far post and signing the lead of his.
The opponents try to strike up a reaction, Mastalli closes his right too much from eighteen meters and does not scare Pelagotti. Palermo covers the field very well and is arranged in a cohesive and harmonious way on the green rectangle: tall, short, and aggressive team with Saraniti and the trident in support who press hard, dirtying the first stabilize possession.

The presence of Martin gives phosphorus, linearity, and geometric sense to the maneuver, the right chain with Almici and Kanoute guarantees dynamism and propulsive thrust. In the non-possession phase, Boscaglia’s team gathers in a sort of dense and compact 4–4-2 that adequately shields the defensive line, cementing order and balance.

Juve Stabia has a jolt on an inactive ball with Garattoni who bags behind Pelagotti hitting the ball clearly with his arm: goal canceled and punishment for the rosanero team. The author of the goal at home Palermo, Andrea Saraniti, must surrender to fate and a muscle problem in the adductor: Lorenzo Lucca points out. Palazzi gets a yellow card for a late entry on Romero. The first fraction ends without further jolts and the Boscaglia team goes to rest deservedly ahead.

At the start of the second half, Mastalli rebounds, collecting a short rebound from the rosanero rearguard and the ball is lost not far from the post. Palermo gets caught by a basic one-two and Orlando sneaks the ball and chain into the rosanero area, his cross is read by Odjer and Juve Stabia just earns a corner.
Boscaglia does not like and vehemently scolds his men by trespassing from the confines of the technical area: the referee penalizes the Sicilian coach with a yellow card. Double change between the guests: Accardi takes over Almici and Floriano takes over from Martin. Unchanged module with Accardi acting as the lower right-winger, Broh climbing in the middle of the field, Rauti hijacked central attacking midfielder, Floriano left-handed sting of the trident behind Lucca.

At 73 minutes, Palermo finds the right reward for his perfect tactical conduct: Rauti ferociously presses Vallocchia and steals the ball from the median, the former Torino produces a powerful percussion and offers Floriano to the rushing an assist to the kiss that the former Bari exploits to perfection. The doubling puts wings at the feet of the Boscaglia players: Kanoute dribbles a couple of opponents in the right lane, swerves, and invites Rauti to finish with delicious unloading in tow.

The problems continue for Palermo that, in addition to the problems related to Covid, must deal with suspensions and injuries, in fact, today against Juve Stabia, first Saraniti (replaced in the first half) and then Odjer who at 63 ‘ he left the field for Peretti.

HERE the Highlights of the match

Share this:
10th day JUVE STABIA vs PALERMO
The RosaNero conquer the 1st victory with authority and character