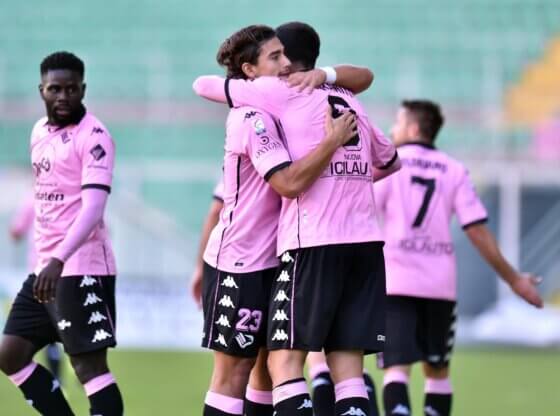 Palermo on the pitch with the typical rosanero uniform: pink shirt with black shorts and socks. The Paganese in a blue jersey with white shorts.

The rosanero coach confirms the 4-2-3-1: Pelagotti between the posts, Almici and Corrado low outside, Palazzi-Marconi to compose the tandem of central defensive units. Martin and Broh, a pair of interior players in the nerve center, Kanoute, Rauti, Floriano form the offensive trident in support of Saraniti.
Mr.Boscaglia team starts the first half well, with a double chance wasted by Saraniti and Rauti, after a series of crosses and a beautiful game in the 11th minute Rauti scores the goal of one to zero.
At 30 minutes Palazzi comes out, Peretti enters.
At 32 Saraniti goals, for the second goal at home!

The Paganese grits her teeth and does not lose heart, from a throw-in comes to a nice play by Diop that frees Mattia, on the cross of the number five Campano Guadagni arrives with a moment of delay in the split: vehement protests by the men of Erra who claim the penalty for alleged detention. Palazzi has to surrender to some muscle problems and leaves the pitch, Peretti points out. Having escaped the danger, Palermo packs a lethal restart: Rauti plows the field and rewards Almici’s run, on the cross from the outside Saraniti who signs the doubling with a precise gore in suspension.

The Paganese feel the blow, the rosanero play on velvet. Rauti throws a sharp and powerful right foot from twenty-five meters and warms Campani’s hands. Almici’s poisonous free-kick created some apprehension for the goalkeeper who was not faultless in the execution of the save A brilliant and authoritative Palermo closed the first half deservedly with a two-goal lead over the opponent.

The second half begins with Paganese determined to make life difficult for the hosts despite the double disadvantage.

Bramati calibrates a poisonous trajectory on an inactive ball and finds Schiavino’s head who, free from marking on the far post, beats Pelagotti and shortens the distance. Corrado is forced to raise the white flag due to injury and Boscaglia detects him with Crivello from the bench. Diop notches well but finds Pelagotti ready to take.
The Paganese takes courage and raises the center of gravity trying to undermine Boscaglia’s rearguard with greater incisiveness. Erra seeks lifeblood from the bench by opting for a trio of changes: out Bramati, Cigagna, and Guadagni, space for Scarpa, Carotenuto, Cesaretti.

Palermo stretches a bit, loses clarity, distances, and the key to the problem, exceeding in arrogance and getting lost in deleterious personalities. At the sixty-nine minute, Boscaglia emulates his colleague, even in the rosanero home three simultaneous substitutions: Martin, Floriano, and Saraniti leave the field taken over by Luperini, Silipo, and Lucca.

The moment of impasse for the hosts ends with some patema, a closure for a corner by Crivello on a cross by Squillace well assisted by Diop protects Pelagotti from worse troubles. Palermo resets itself and finds balance and intensity of maneuver, Silipo tries an interesting left-footed shot but does not hit the target from twenty meters. Erra plays the Mendicino card in place of Mattia at minute eighty-two. Almici kicks a free-kick to the side from an excellent position, Lucca steals a heavy ball and triggers a potentially lethal restart, but takes too long to serve Silipo catching him off-side.

Isufaj notes Bonavolontà among the guests. The Paganese is produced in a final forcing and Palermo suffers slightly from the progress of the opponents. Boscaglia is furious for a couple of starts in numerical superiority sensationally wasted by his men, the rosanero team grits his teeth and manages with determination the four minutes granted by the race director.

The threefold whistle of the referee marks the second consecutive success (at home) of the Sicilian team.