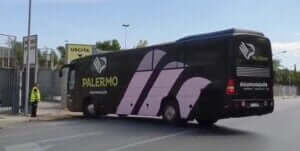 Six rosanero healed: green light for the trip to Catanzaro

Yesterday Palermo announced that the cycle of swabs carried out on Friday 30 October showed a negative result for the Sars-Cov-2 virus for 6 subjects out of 8 examined belonging to the first group that tested positive. For the six players, the exams for the release of health eligibility are starting today.

After a difficult start to the championship with three defeats and a draw, Palermo had to face the wave of Covid-19 that hit the entire team.

From next week Palermo will return to thinking about the pitch with the aim of reversing the course in this traumatic start to the championship. Coach Boscaglia will rely on the most experienced players on the team.
Among all Pelagotti, Crivello, and Saraniti. The defender started as a protagonist, while the attacker found some difficulties in these first seasonal releases. Clearly the team will need the best Saraniti to start winning and move up the rankings as soon as possible.