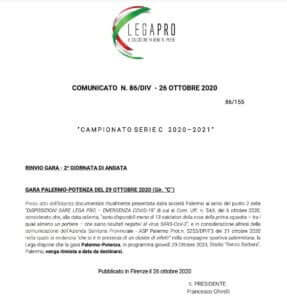 PALERMO – POTENZA has been postponed (again)…

The match with Potenza, valid for the second day of the championship, had in turn been postponed to October 3 due to some positivity among the guests and then now has postponed again.

After days of uncertainty, the decision regarding the Palermo – Potenza dispute arrived: the match was officially postponed, given the emergency that the rosanero club is experiencing.

The match, scheduled for Thursday 29 October, has been postponed as well as the matches with Turris and Catanzaro. There will now be three matches to recover for Palermo. The motivation is obviously linked to the difficult situation in the pink house: the Viale del Fante club has 19 positive team members, including 15 players.

The Palermo line on the interpretation of the regulation regarding possible cases of Coronavirus therefore passes: the Primavera players, at least for the specific case, were not considered an active part of the squad and the postponement has opted. As anticipated by this newspaper, the dispute of the game would have made little sense given the situation.

“Pending official communication from Lega Pro, Palermo announces that the Palermo-Potenza match scheduled for Thursday 29 October at the Renzo Barbera stadium has been postponed to a later date”.

Having acknowledged the documentary request duly presented by the Palermo company pursuant to point 2 of the “PROVISIONS OF LEGA PRO TENDERS – COVID-19 EMERGENCY” referred to in the Comm. n. 54 / L of 6 October 2020, considering that, as of today, “fewer than 13 players from the first-team squad are available – including at least one goalkeeper – who have tested negative for the SARS-CoV-2 virus”, and in consideration also of the communication of the Provincial Health Authority – ASP Palermo Prot.n. 5253 / DP / F3 of 21 October 2020 in which it is highlighted “that there is a cluster of infected” in the Palermo sports team, the League states that the Palermo – Potenza match, scheduled for Thursday 29 October 2020, “Renzo Barbera ”, Palermo, be postponed to a later date”.