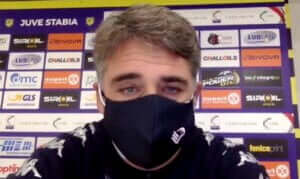 The first victory for the RosaNero conquers the Juve Stabia field with authority and character!

Palermo wins and convinces against the match Juve Stabia with a careful and characterful performance. Best in the field finally Saraniti for the goal and the general performance before going out due to injury, worse

BOSCAGLIA: “WE DOMINATED, THEN TIRED HAS ARRIVED”
“The boys played three games close together, always being the same. Today we had a problem with Saraniti and we will see the conditions. On the match I say that the boys did very well, we dominated in the first 45 minutes, then fatigue came. To complain is the fact that we have not closed the game and we have had several chances “.

ATTITUDE:
“These matches are the ones that I like as well as against Catania and Catanzaro with continuous doubles and overlaps in the attack. The team was born to be like this, we still have to improve many things, but this is the team. What has changed? Something has happened: we will have to talk more about it and now there is no time. We certainly pushed to make something happen especially from the motivational aspect. The team has evolved from the aspect of attitude, without this attitude you do not draw and you do not win the games”.

INJURIES:
“We will see the conditions of Saraniti and Odjer, but if we have this attitude I am quite calm and serene”.

In the meantime, Mr. Tony Di Piazza sent a message
for the Palermo FC Victory!

Saraniti, who spoke at the press conference, declares:
“I lived this day in two phases: the joy of the goal and that of the end of the game for the result brought home. We will see together with the medical staff the extent of the injury.

Goal? It is not a pebble from the shoes that I took off, I have always had a hug from the staff and the fans, we forwards are like that sometimes we score and sometimes not. For an attacker not scoring on a mental level can cause damage, a goal that unlocked me and that was important on a personal level. The fundamental thing was to be able to win, we compacted and I would say that in the last few races we have been heroes, bringing home positive results.

Reaction after Covid? There was, in bad luck we were united and it must be remembered that we were forced to stay away from our families, we strengthened each other with the support of staff and companies. On these occasions, you must always be united. Paganese? They are all difficult games, it will be a tour de force remembering all the games we have to recover. You have to stay focused and you can’t pull the plug, let’s ride the wave and stay on track “.

Three games to be recovered on Wednesdays and two to be played in the coming Sundays. It is a strange coincidence that Palermo will play all matches within the friendly walls of Barbera in the next 20 days, an advantage apparently not to be underestimated for Mr. Boscaglia’s men.

Here is the detailed program at the rosanero home: