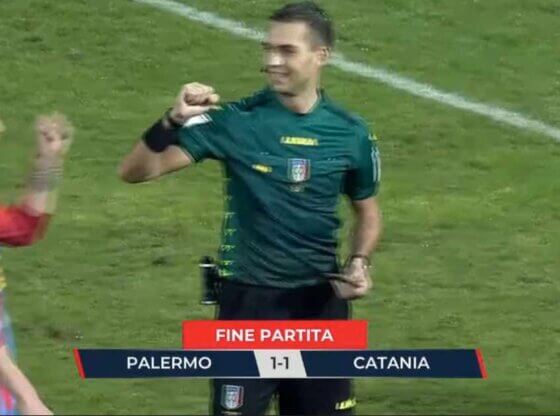 The long-awaited Sicilian derby ended 1 to 1

Palermo has just thirteen players available including at least one goalkeeper, a minimum requirement, as the anti-Coronavirus regulatory protocol, to play an official match.
Although in conditions that are, to say the least, precarious on a technical and numerical level, the rosanero team faces a fundamental crossroads of his troubled season without a single player on the bench.

The start is cautious and the game unfolds at a not too exasperated pace in the deafening silence of the “Barbera” without the historic audience.

The Palermo remains high with the defensive line and the departments try to shorten forward to take away the breath and depth of the guests.

Kanoute unlocks the derby, rose forward thanks to “Barbera”.

The 4-2-3-1 of the rosanero turns into a decidedly more defensive 4-5-1 in the second half, the structure of Catania also changes and in the second half with Piovanello and Biondi inserts two wings as well, in addition to the presence of Emmausso, Reginaldo and Pecorino at the same time. Heavy artillery that in the long run leads to Pecorino’s equalizer.
Palermo-Catania ends in a draw: one time for each side at “Renzo Barbera”

Palermo runs out of petrol, but resists and takes home a point. At Barbera, it ends 1-1. Half-full or half-empty glass for Palermo and Catania, this remains to be understood.

Without substitutions and in the most important match of the championship, the Boscaglia team manages to snatch a point from Etna

The Sicilian Coach Boscaglia after the match to the raisport microphones said:

“We had a great game and I have to thank the guys who are heroes. We had a problem with Valente who stretched but clearly stayed on the pitch changing positions. The team played a great game and Catania suffered little. We believed in it and we would have deserved the victory above all because their goal was spoiled by a handball, in this first part of the championship we had some difficulties but we have to regroup to get our heads up ”, were his words.

“The team has started to assimilate my methods, we have worked on many such situations. Today Martin has shown that he can also play two when the outsiders play well, but things must be seen. We are going on our path that we have traced since retirement, there are players with characteristics that can be exploited and we are calm. The team proved to be doing well, a solid group that helped each other like never before. They spent themselves for their teammates and I can only be satisfied with this ”.

An important result, however, by virtue of the sensational circumstances in which the squad decimated by Covid, played…
The director and shareholder of Palermo Tony Di Piazza is well aware of this and, on the sidelines of the challenge, he wanted to celebrate the test of the men of Boscaglia.

Many Palermo players who were unable to play the game sent messages to their team: “Proud of you,” wrote the Palermo defender, Andrea Accardi.

Well another point and no victory, but for sure Palermo plays with heart and courage. The week is short and we hope to catch my breath for the next match with Juve Stabia Wednesday 11 November 2020.
We believe in the project of Mirri and Di Piazza, as well as coach Boscaglia, usually that his teams give a greater sprint in the second part in the championship and we are going to wait for it.

So, again be positive and FORZA PALERMO SEMPRE !!!

Share this:
84th Derby Desire depends on negatives results?
The Boscaglia conference at 12 is break down
View More