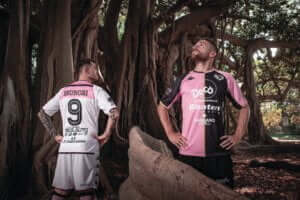 Palermo today presented the new Kombat ™ home and away match kits for the 2021-2022 season at the Botanical Garden of the University of Palermo, created in collaboration with the Palermo agency Gomez & Mortisia and the Kappa R&D center.

What are you willing to give up for your colors?
The oldest love story in the world: the one between man … and his shirt. 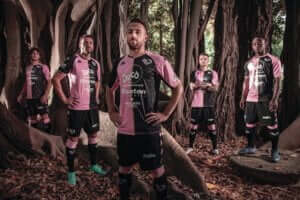 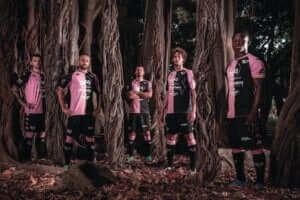 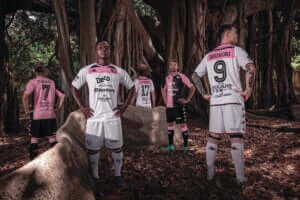 In particular, the first shirt is stylistically a tribute to the first rosanero uniform in the history of Palermo, which was in fact perfectly two-tone, pink/black, starting as early as 1907. The shirt also recalls the company logo in which the today’s colors of Palermo: precisely a shield perfectly divided in half, pink and black. After so many years of almost exclusive pink prevalence, the Palermo shirt, therefore, returns to balance its two main colors in equal measure.

A sign of continuity also with the third jersey of the 2020/2021 season, which to celebrate the 120th anniversary of its foundation, was proposed in a brand new white-blue two-tone. The graphic design of this two-tone rosanero shirt was also among those eligible for voting in the poll open to all fans in 2019. In that case, among over 12 thousand preferences, the second most voted was the two-tone rosanero.

The two halves of the shirt are separated by a thin golden line. A detail that embellishes the combination of the main colors and is proposed in the finishes of the collar in an elegant way.

The second jersey also has a historical reference: it takes up the style of the Palermo “puchain” of the late 70s. A style that in those years was also adopted by some of the shirts of the most famous Serie A teams. This choice also marks the return to white as the main color for the second shirt of Palermo. A vintage-oriented choice, a classic that returns, immediately recognizable by most fans.

Also this year, the launch of the first jersey is accompanied by a video directed by Riccardo Lupo, this time with the photograph of the master Daniele Ciprì, already winner of the Davi di Donatello and the Nastro d’Argento, acclaimed at the Venice Film Festival. In the video, with an ironic and surreal cut, two new Adam and Eve stroll through paradise, in the idyll of a perfect world.

Until the proverbial temptation presents itself in the classic form of a snake, but with the new rosanero jersey instead of the famous apple of sin. Resisting will be impossible and our Adam will find himself giving up his perfect life in order to wear his own colors. For this reason, we see him go away running after a ball, but happy with his “earthly” choice. A symbolic metaphor of everyday sports: it would be nice to live in a world where everything is easy and results are achieved without effort.

But loving your colors also means choosing and accepting having to sweat every result, with your own commitment. Pink and black as inseparable parts of the same medal, of the same shirt.

To greet the new jerseys, the sponsors of this season, between reconfirmations of the last championship and new entries, thanks to the partnership with INFRONT Italy for the exclusive management of all the marketing rights of the rosanero team, both for the national territory and for that international.

The Arena Group is the reality of the most dynamic and structured large-scale distribution in Sicily, ranking first in the panorama of supermarkets preferred by Sicilians. The Group, founded in Valguarnera Caropepe (EN) in 1976 by the brothers Gioacchino and Cristofero Arena, today with a network of over 190 Decò and SuperConveniente stores and over 2500 collaborators, is the absolute leader in the Sicilian territory.

A history of the Group, over 40 years long, has led the Sicilian company to become the reference point for Sicilians’ spending.

Bisaten is a brand of Colorificio Giuseppe Di Maria S.p.A. which has been producing paints and varnishes for professional construction since 1925 and products for finishing, sanitizing, and personalizing environments.

There are over 2,000 retailers throughout Italy that Colorificio Di Maria today counts among its customers. The Di Maria color building is today a point of reference throughout Italy in the field of paints and varnishes for building. The company, created in Palermo by Francesco Di Maria, became a joint stock company in 1969.

With the third Di Maria generation, the GDM brand spreads throughout Italy. The goal is now to consolidate the Italian market and strengthen relations with foreign customers through the offer of professional and high-quality products.

Gagliano has always been a reference point for jewelery in Palermo. Managed since its inception in the historic store of C.so Camillo Finocchiaro Aprile 95, today the company has further expanded with management and online sales, becoming