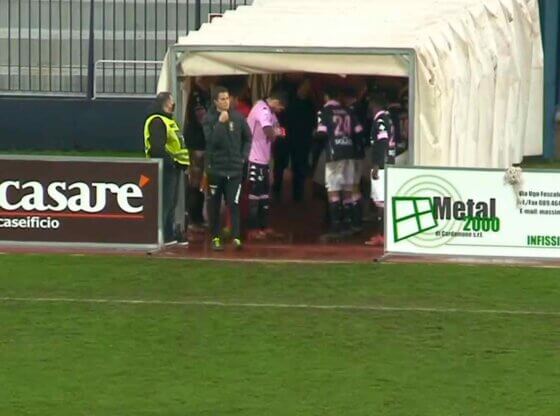 White networks between Palermo and Cavese at the end of the first half, in the first official match of the squads of 2021. An ugly Palermo, little purpose against the last in the standings, in a match, to be won at all costs.
The mistake from the spot by Lorenzo Lucca was sensational, who in the 40th minute would have had the opportunity to take the pink lead, but the rosanero striker clumsily kicks out the penalty kick assigned by the referee for a foul on Nicola Valente.

Also worth noting was a goal canceled for offside always to Valente, who appeared among the best in this bad first half. For the rest, little to report apart from a couple of good saves by Pelagotti We need a shock in the second half to try to win.

Pelagotti between the posts, Accardi and Crivello low outside, Lancini and Somma a pair of power plants to complete the rear. Martin pole catalyst in the median, Odjer and Luperini to act as mezzali, Valente, Lucca and Kanoute to form the offensive trident.

Palermo tries to take over the reins of the game with an authoritative air and do a maneuver but in the first ten minutes, there are no particularly significant emotions. At the twelfth thrill in the rosanero home, Lancini touches the ball back for Pelagotti, and a puddle risks playing a bad joke on the visiting far end who manages to remedy. Martin runs out of time to stem an opponent’s restart and gets a yellow card.

At the twentieth, Palermo also found the goal of the advantage, but the position of Valente, good at heading a cross from Odjer, was judged to be illegal by the referee and therefore remained in a tie. Cavese responds practically immediately, but Pelagotti is good at opposing Germinale’s header and avoiding the worst. Crackling minutes, with yet another jolt from the rosanero signed by Lucca that calls the home goalkeeper to a difficult intervention in low grip after a nice cross from Valente.

At the thirty-nine minute, Palermo packs a great chance to break the deadlock: Lucca triggers the percussion on the left-handed track of Valente who is spread out as he enters the penalty area. The subsequent penalty is kicked very badly by the 2000 class who angles the right too much, chewing the conclusion and not hitting the mirror of the goal.

The second fraction begins of this discreet match, a touch of the ball at Cavese. Boscaglia replaces Martin, in place of him Palazzi. At 49 ′ Odjer’s big cross, Valente arrives at the far post who misses the mirror of the goal in the split. At 50 ′ Luperini recovers a good ball in the area and serves Lucca, the attacker tries the conclusion, but the Russian goalkeeper saves everything on the goal line.

At 56 ′ Cavese loses Cuccurullo due to injury, in place of him Pompetti. In the 58th minute, an incredible series of rebounds in the Campania area, with the conclusion of Lucca being rejected by the opposing defenders. At 59 ′ Campilongo replaced the striker Bubas, in place of him Montaperto. At 62 ‘the referee warns Valente for a foul intervention on Russotto. The yellow card also arrives for Palazzi, after a foul on Montaperto. At 64 ′ enters Rauti in place of Valente. Cavese opportunity: on the development of a free kick, Germinale controls the ball and tries the conclusion, ball over the crossbar.

At 70 ‘Lucca and Kanoute leave the field, in their place Saraniti and Silipo. At 73 ‘Silipo is brought down by Marzupio and the referee warns the defender from Campania. At 77 ‘cramps for Ricchi, in place of him Semeraro. Nunziante also comes out in Cavese, in place of him Senesi. Change also for Palermo: captain Santana enters, outside Odjer. At 82 ‘diagonal of Saraniti that crosses the mirror of the goal and ends outside. At 85 ‘Russotto sowed panic among the rosanero defenders, Lancini knocked him down and was booked. Matera, already warned, commits a foul intervention on Rauti and gets another card. Cavese in ten.

The fourth official signals five minutes of recovery. GOAL OF PALERMOOOOOOOO !!!! Rauti unlocks it at 90 ‘+ 2’ with a header on the development of a Palazzi free-kick. Rosanero ahead! During the celebration, the rosanero striker also received a yellow card. Then the referee blows his whistle to end the match and Palermo can finally celebrate their return to victory.