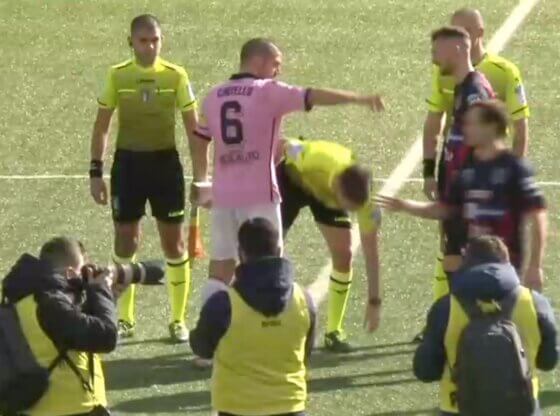 The rosaneros like them for their personality and geometry from the very first part of the match. Greater dynamism and intensity can be seen compared to the usual standards and the technical leadership of Ciccio De Rose immediately becomes a factor for the Sicilian training. Just a vertical transition of the former Reggina triggers Valente whose cross a little too energetic is hit by Lucca inertia without frightening the home keeper too much.

Palermo takes the ball with authority in hand and definitely makes the game. Between the seventeen-minute and the twentieth of the first fraction, the visiting team creates two interesting situations in the offensive phase: Crivello crosses well from the left but the header of Lucca is not accurate, so the same 2000 class invents a delicious flying heel counter to turn on Kanoute, assist for the free Valente who controls not very well and kicks with his right, engaging Marcone.

Boscaglia’s formation pushes hard and risks practically nothing, great cohesion and compactness between the lines are evident, the Palermo manages to remain high and not to lose density in the phase of non-possession thanks to application and commendable dedication when folding.

The first ring of the Lucanians arrives near the end of the first fraction: Ricci escapes the control of his opponents and kicks dry committing Pelagotti who responds on his par. The first half ends with white nets.

Few emotions and low rhythms: the second half begins…

The second half unfolded in a rhythmic and insipid way. Broh for Odjer, Rauti for Kanoute, Saraniti for Lucca, Floriano for Valente. No adrenaline jolts or upheavals of tactical equilibrium and power relations on the green rectangle. The second half tells a tired and faded script. The Palermo that tries in a scholastic way and not very convinced to play the role of the strongest, the Potenza that contains and stems with extreme ease the pace of the Sicilian formation at the small trot.

A header by Valente who does not find the mirror of the goal, a violent but inaccurate right from the edge of Rauti, a head shot of the same number 23 easily controlled by Marcone. A couple of crosses by Doda, sharp and not easy to read, do not find the teammate ready for the winning deflection at the far post. That’s all. Really too little.

With a cautious opponent huddled in his own half, happy to take home a point, perhaps waiting for the right restart, it was reasonable to expect a much more electric and strenuous Palermo. Unfortunately, the trend of the rosanero maneuver did not register creativity curves and significant peaks of incisiveness compared to the greyness of the latest releases. Cumbersome horizontal phrasing and search for width in the lane for the usual cross to seek fortune, with the Lucan defense deployed and ready to engulf every elementary air trajectory.

Not a dribble, an internal cut of a trident spike, a hole in the attack at the depth of the striker, a conclusion from the outside, or insertion without the ball by a midfielder, an impromptu and out of the ordinary play. Palermo, despite himself, the author of a linear but opaque and extremely banal football. An evanescent and fruitless litany, far removed from the founding principles of Boscaglia’s conceptual and technical verb.

Among the four replacements today, only Rauti has impacted the match on the mental and competitive level in an adequate way.

Broh, Saraniti, and Floriano, not at the top of the coach’s hierarchies and notably not at the top on a psychological and motivational level, had a hard time making an impact and changing the face of a dull team in obvious difficulty.

Boscaglia tested multiple tactical solutions and branches in progress during the season, in terms of set-up, attitude and performers. As many theoretically expandable options that the technician has effectively banned with his choices. Not considering them, rightly or wrongly, useful to the cause. The fact is that the flaws, gaps, and limitations of this team recur randomly, cyclically, and consistently, from different angles and with varying degrees of intensity. Without the former coach from Brescia and Trapani being able to find a substantial remedy to date.

On the basis of a fluctuating performance, which tends to be mediocre, and a disappointing path in relation to the expectations of the eve, the responsibilities must be equally divided between the various components: ownership, management, coach, and players.