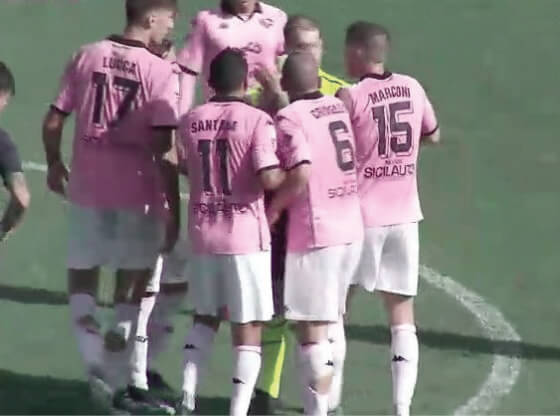 The first ball of the match is from the rosanero, who try a long ball for Luperini. Baschirotto tries a cross in the second minute, the ball is deflected by Accardi and ends up in a corner kick. On the developments, Murilo tries a heel strike, but his position is offside. At 9 ′ another corner kick for the hosts, but for the Sicilians, there are no particular dangers.

In these first 10 minutes of the game, the Lazio players are doing better than the men from Boscaglia, who have not yet seen each other on Daga’s side. The captain of the Viterbese Simone Palermo remains down and needs medical attention. The number 10 fails to continue and must leave the field after 14 minutes of play, in place of him Taurino puts in Adopo.

At 15 ‘first opportunity for Palermo with Lucca who tries the displaced head, but the ball goes out on the bottom. At 20 ‘Rauti tries to accelerate on the right side but is stopped in a lateral foul. In the 23rd minute, Bensaja tries the hole for Rossi, but Accardi first and Peretti later are careful and send a lateral foul so as not to take risks. The first yellow card of the match at 24 ‘, it is Murilo who enters in a broken way on Peretti.

Now Palermo seems to be on it and pushes more frequently, but the Lazio players leave no room. De Rose at 26 ‘tries a slope for Lucca positioned in the area, the former Turin skims the ball which is blocked by Daga. Also for Palermo, there is the first yellow card and it is Marconi who knocks out Simonelli. At 34 ‘Lucca is put down by Mbendè at the edge of the area.

The position is interesting and Almici takes care of the punishment, but the conclusion ends on the barrier. 1 ‘still Lucca landed by Mbendè wins a new free-kick, this time at the left edge of the Lazio penalty area. The former Torino takes care of the service, but the ball is deflected in a corner kick by Daga.

Hosts who want to close the first half of the game forward. Baschirotto pushes to the right out but hits Accardi and is cautioned. There are 3 minutes of injury time reported by the fourth official. Ball management of the rosanero, but the guys from Taurino close all the spaces well.

Baschirotto again on the right out, crossed from the center of the area and Almici sent her for a corner. On the developments, the hosts unlocked the challenge by going 1-0. Confusion in the area, the ball ends up between Adopo’s feet who deceives Almici and Accardi by bagging the ball into the goal. The first part of the match ends with Adopo’s goal.

Boscaglia uses a change sending Silipo on the field for Rauti. Tactically nothing changes, but Silipo guarantees more thrust being a pure winger. The rosanero start immediately strong to try to make up for the disadvantage. Floriano at 46 ‘tries with a shot around without framing the mirror. At 47 ‘from the edge of the area Silipo tries, but his shot hits the ground and Daga blocks.

Rosanero still close to scoring. Silipo, at 51 ‘, receives the ball wide on the right, focuses, and unloads for Floriano who immediately kicks towards Daga’s goal and touches the post. The fourth occasion of the recovery for Palermo. Martin in the area tries a left diagonal that shaves the pole.

To try the same Boscaglia at 54 ‘puts Santana in for Martin. Penalty kick for Viterbese and Palermo remains in 10. Almici, who at 58 ‘had received the first yellow, at 59’ Murilo lands and receives the second yellow. Murilo appears on the spot and kicks to the right of Pelagotti who is careful and saves the penalty keeping the match at 1-0.

Palermo seems to be in trouble and paying the numerical inferiority. Santana in the 70th minute tries a cross in the center of the Lazio area, but the ball is removed. Palermo seems nervous because he can’t find the equal. Luperini also receives the yellow card in the 76th minute, putting down Bensaja, who needs medical attention.

At 79 ‘Palermo which remains in nine. Odjer is cautioned for a dangerous intervention and is cautioned; the former Trapani says a few words too many to the referee who sends him out immediately showing the second yellow. Lucca remains down in the 84th minute, earning a free-kick. Silipo appears on the ball and crosses the center of the area, where Lancini arrives who tries his head, but his shot is deflected for a corner.

Share this:
Viterbese / Palermo 8th-day Waiting for our destiny
Roberto Boscaglia was relieved of the post of coach
View More