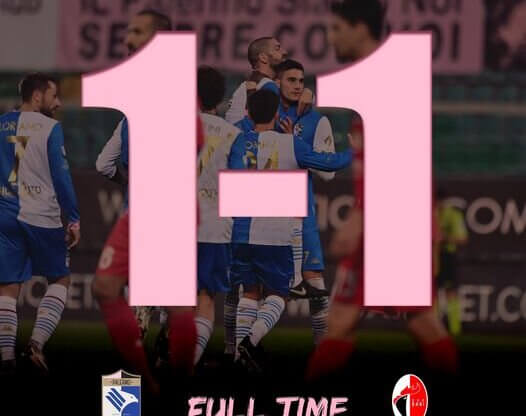 So much Palermo and little Bari. Yet to save the men of Boscaglia at the end will be only punishment from Lucca. The rosanero play one of their best matches, they start strong, crush Bari and create many goal opportunities, but in the end, it is Auteri’s team that takes the lead: to D’Ursi’s goal in the first half, Lucca’s one in the final minutes of the match: 1-1 the final result.

A Christmas photograph that perfectly captures the problems encountered by the team from Boscaglia during this first part of the championship. At this point, it ends with only 21 points in the standings this 2020: five wins, six draws, and five defeats. A roadmap that does not seem to coincide with the initial plans of a company that, while on the one hand it never said it wanted to kill the championship, on the other hand, on the other hand, it never hid that it wanted to play a leading role together with Bari and Ternana. Palermo will open the new year on January 9 on the Cavese field.

It takes very little to Boscaglia’s 4-1-4-1 to understand that the opposing team is not so invulnerable. The squads have a better start and for 44 minutes they don’t seem to see the 13 points difference in the standings. The midfield did well, with Luperini returning to his origins, the attack was just as good, which was also and above all emphasized by the explosiveness of Rauti, who was so lacking in the squads both in Foggia and in Vibo Valentia. There is his hand in the three scoring chances. The young striker owned by Torino even touches the net with a free-kick, after coming close even with a header close to Frattali.

Have a look of the Palermo vs Bari Photogallery

On the other hand, there is a sly Bari, a team that at times seems to bring out all its quality in the ball, only to suddenly go out. Palermo does not take advantage of it, so it is Galletti who undeservedly find the goal of the advantage at the end of the first half. The goal came from the feet of D’Ursi, who was good at exploiting a chance rebound close to Pelagotti, at the height of a good initiative by Marras.

In the second half, Palermo starts along the lines of the first half. Accardi’s cross and Luperini’s header: but the ball is high above the goal defended by Frattali. The pinks create a lot, they crush Bari but are struggling in the realization phase. Inaccurate attackers in front of goal mistakes that in the first half cost dear to the men of Boscaglia. Palermo increasingly masters of the field, only the network is missing. Thus the rosanero coach overturns his eleven owners, sending Silipo, Floriano, Lucca, and Valente on the field in place of Palazzi, Kanoutè, Lancini, and Rauti.

A few minutes later Palermo also found the equalizer, but Luperini’s winning tap was spoiled by an offside position. And when everything seemed lost, Lucca invents a free-kick goal that leaves Frattali astonished, but also the rest of those present at the Barbera. Lucca himself is also building, which has decided to celebrate the network by making the statue to Mark Bresciano. Palermo greets this 2020 with a half-smile considering how the draw has matured.

Palermo vs Bari below the video goals

The Palermo vs Bari infos…