Stadio Renzo Barbera Palermo since 1932 the Heart of loves 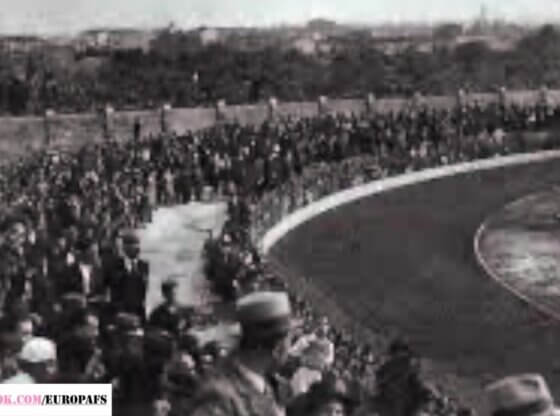 Is a football stadium in Palermo, Italy. It is currently home to the Palermo Football Club team. The stadium was inaugurated on 24 January 1932 and the opening match was Palermo vs Atalanta, with Palermo winning 5–1…

Watch other videos or highlights

In 1948, the running track was removed, and stands behind each goal were built. The stadium then remained largely unchanged until 1984, when the second main redevelopment took place involving the addition of a second tier to the stadium, which increased total capacity to 50,000 spectators. This maximum capacity was, however, only reached twice: in a Serie C1 league match against Sicilian rivals Messina, and for a friendly match against Juventus.

A third, and to date the most recent, modernization of the stadium took place in 1990, due to the city of Palermo having been chosen to host a number of the 1990 FIFA World Cup First Round matches. A tragic accident occurred during the course of these works, resulting in the deaths of five construction workers.[2] Following this redevelopment, the total capacity of the stadium was lowered to its current 37,619 seats.

On 18 September 2002, the stadium was officially renamed as Stadio Comunale Renzo Barbera, in honor of the chairman of Palermo during the club’s last Serie A tenure, as well as the two Coppa Italia finals throughout the 1960s and the 1970s, who had died that same year on 19 May. In the Serie A 2004-05 campaign, which marked Palermo’s first appearance in the top division for over 30 years, all seats in the stadium were already sold before the season began to season-ticket holders. However, this was not repeated in the next years.

Transports
The stadium is linked to the city center and the central railway station by regular bus route 101.

In more than eighty years of history, the municipal stadium of Palermo has hosted not only the internal matches of the various national and international competitions played by Palermo, but also meetings of the National football team of Italy, which, not having a fixed national stadium , he played several times in the Sicilian capital. The Azzurri have been involved in the Palermo municipal on some occasions starting from 28 December 1952, when they played there for the first time in the match valid for the International Cup, subsequently seeing the Azzurri winners of the match, 2-0 over Switzerland.

Concerts
The stadium was frequently used as a music concert venue during the 1980s. Starting in the 1990s, however, concerts and other cultural events were gradually banned from the stadium due to fears they could damage the grass on the field. The Renzo Barbera Stadium is currently the only stadium in Italy where concerts are prohibited. From the early 1990s, large open-air concerts in Palermo were held at the Velodromo Paolo Borsellino instead.

The sectors
Curva Nord: sector where most of the organized supporters of the province are located, in the past, it was also called Curva Mondello;
Curva Sud: also in this sector, there are organized supporters, and there is the so-called cage reserved for visiting fans;
Covered grandstand: the only covered sector of the stadium; the side where most of the cameras are placed and in this sector are also located the Press Stand, the sponsor area, and the VIP Stand;
Montepellegrino Grandstand: better known as Gradinata, mirrors the covered Grandstand but without the cover.

Renzo Barbera Stadium, the collapse in which 5 workers died 29 years ago
On 30 August 1989, during the expansion works of the plant for Italia 90, the builders Antonino Cusimano, Serafino Tusa, Giovanni Carollo, Giuseppe Rosone and Gaetano Palmeri died due to a collapse.