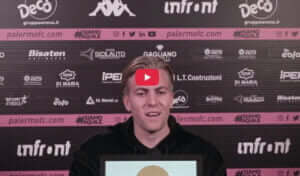 Conference: The presentation of Mattia Felici

The Roman player (re) introduces himself: “Many teams in C were looking for me but I only wanted to come back here because I know the square, I can’t wait to play.” On the current situation: “For now we are training in 8 but the coach makes us work a lot. For the 90 minutes I will need one or two games” Palermo arrives at home on the day of Mattia Felici who is officially presented at Palermo two years and four months after his first experience in rosanero, which began in August 2019.

The playmaker arrived on a two-year loan with the right to redeem and counter-redemption from Lecce with the aim of relaunching after difficult years. In the first instance, the player explains what were the reasons that led him to return to where his professional career began and his feelings after the first impact: “Let’s say that we knew I would go on loan – he said – because ‘there was little space: other C teams wanted me but I only wanted to go to Palermo because I knew managers and fans and this pushed me to return.

I had a year and a half of injuries, I broke my foot twice and my shoulder twice: I hope this year goes better. I talked to the coach who is a tough guy: with three training sessions, I understood what a person he is, he makes us train a lot and I needed a coach so that he could bring me back to a high level. We did three very high-intensity workouts ”. Felici then spoke about his condition and his prospects within the team: “I think he is already in top form, maybe for the 90 minutes I will need one or two games but at the moment I feel great.

For now, we are training in 8 for now it is like that. We chose this formula to be a player half of Lecce, half of Palermo so there is an interest in taking sides, I hope to do well. For me right or left is indifferent, I like to play on the outside, jump the man, cross or shoot but if the coach should try me as an attacking midfielder, why not, I can play there too. ” The Roman playmaker then explains that he was then unable to find his old comrades from the year in Serie D, effectively revealing their positivity at Covid: “Unfortunately, the companions I had in D are almost all positive – he revealed – but I met other teammates who seem good to me With Pelagotti we met to swab and it was positive we had time to exchange a few words ”.

Regarding the future scenario, the player is not unbalanced: “It is not me who decides, I see myself in both teams because I am half of Lecce and half of Palermo – he explained – if Palermo wants to redeem me well otherwise I will go back to Lecce, for me it changes little “. In closing, Felici talks about his state of mind, explaining that he does not fear the impact of the field and with the third series: “Imagine that I have not played for a year and a half – he concluded – I can’t wait to get back on the field and play them all, hoping that there are no more injuries.

I hope to be able to give my best as I did in D. I don’t know the league but I talked to people who played in C and they explained to me that the league is tough “.