Originate:
On October 24, 2003, at home against TOP Oss, the Brigata Tifosi made its first appearance within the stadium walls of De Vijverberg shortly after it was founded. Hundreds of blue and white throw plinths adorned the Spinnekop stand.

There was no follow-up to this action, after which a new generation of BT employees breathed new life into the initiative. Now, more than 15 years later, the Brigata Tifosi has become an indispensable part of the Dutch supporter’s landscape and the group is also known far beyond the national borders. 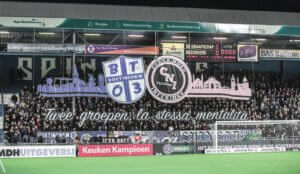 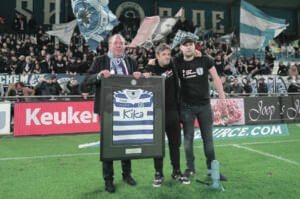 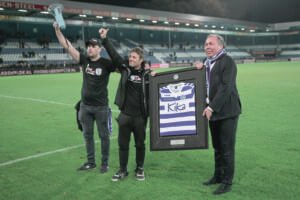 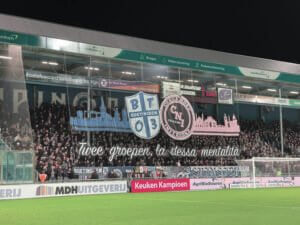 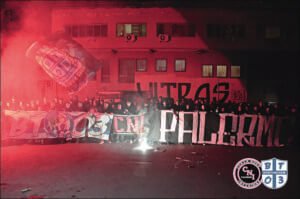 CNI Palermo
For several years now, BT had a friendship with Curva Nord Inferiore Palermo. A BT-er left for an internship in Sicily, where he visited Palermo matches out of interest in the scene and got to know the supporter culture. After a friend request on Facebook, the ball started rolling.

He was invited to the Curva and soon became ‘A friend of Palermo’, partly due to the work he performed in the ‘Ballaro’ district. Several BT-ers made the crossing to Palermo several times, where they also became acquainted with the Palermitans and the (football) culture.

The BT man in question was not back in the Netherlands for long when he left for Palermo for another extended period. He was included in the Curva Nord Inferiore ‘family’ and a visit with the entire group was inevitable. Due to similar principles, style of support, and interests, a visit by the Palermitans to Doetinchem was inevitable.

In March 2017, a large delegation made the crossing to the Netherlands to stay at our home for five days. After a much-discussed trip to Sittard-uit, the tires are indelible. In the meantime, some Palermitans have moved to Doetinchem and are fully involved in the group. That seems to be a friendship for life!

PreviousCoach Filippi before the 9th Match against TurrisNextHighlights 9th round Lega Pro, Turris vs Palermo, a lost away match.
Back to top