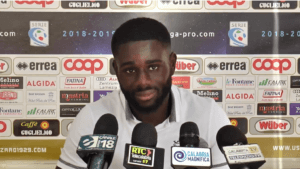 It has been over a decade since the Nigerian legend hung his football boots, but his exploits in the game continue to influence many after him

Senegalese midfielder Mamadou Kanoute has confessed that he looks up to former Super Eagles midfield wizard Austin Okocha for inspiration, even as he promised to raise his level for his new club, Palermo.

One of Africa’s greatest-ever players, Okocha was famed for his trickery on the ball, his incredible vision, and his ability to get past opponents effortlessly.

Kanoute signed for Palermo on Thursday after spending two years on the payroll of fellow Serie C side Catanzaro.

The 26-year-old playmaker has not scored a league goal since 2017, but he believes that by drawing inspiration from the Nigerian hero, he can rediscover his form in front of goal.

“I’m fine physically and I can play right away if Mr. Boscaglia wants,” Kanoute said, as quoted by the ItaSportsPress.

“I will work to score more goals as I have scored few in the past. Jay-Jay Okocha, former Nigerian international, inspires me.”

PreviousPalermo Today in Sicily 2020NextPalermo in the Netherlands
Back to top