Palermo FC will have its sports center in 2021.

Home /News, Photos/Palermo FC will have its sports center in 2021. 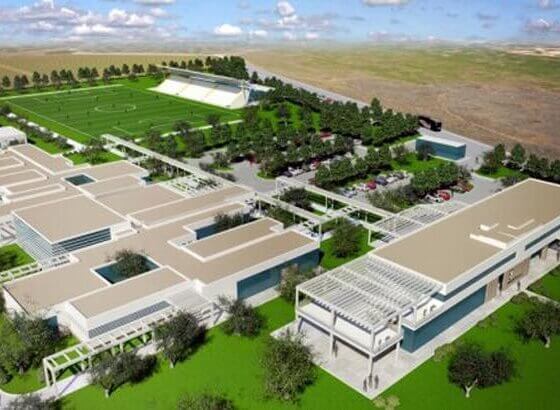 Finally, the Palermo Football Club will have its sports center in 2021 which will see the light in the Torretta area, below are the details of how the facility will be structured.

The field, indicated in the photo with the number 1, more detached from the other two, the one to be understood bordering the provincial road, is the only one currently existing as it is the municipal field of Torretta whose process of work for the transformation of itself from the current earth to synthetic grass is already underway. This is the facility that the rosanero company has had in concession for 5 years, renewable for another five at an annual fee of 12,600 euros, excluding VAT, next to which there is also a tennis court.

Continuing to look, you can see that after the border with the municipal field begins the area that the company of Dario Mirri and Tony Di Piazza bought from the Ugdulena family. On the border with the land where you can see the inscription phase 2, along which the access road to the facility will wind, the number 2 indicates an old existing building that will be used as a clubhouse for the players. An area where before and after training, the team can relax with a drink at the bar rather than playing table football or watching some TV.

The number 3 indicates an area that will be used for parking for staff and team cars.

The number 4 instead indicates the first of the two fields that will be built from scratch which will probably have a synthetic grass surface and will be destined almost exclusively for youth teams.

The last field, number 5, which will be built on this area, on the other hand, will have the same characteristics as the Renzo Barbera base and will be the one that the first team will mainly use. In the body of the building indicated with the number 6, there will be the changing rooms and all the useful services for the different teams of Palermo. Finally, in complex number 7, the press room and spaces reserved for journalists could perhaps be built.

Not immediately Palermo could decide to expand also to the area called Phase 2, whose intended use is currently not compatible with the needs of the Rosanero society, having as a regulatory plan use of agricultural green. A destination which, however, cannot be excluded that it may, following a regular procedure, be varied so that Palermo can create two other fields.

Certainly today for the rosanero company and for its supporters, first and foremost the AmiciRosanero who will contribute concretely with the amount raised for popular shareholding, even if only for the doors of the three fields, today is a historic date. The sports center will be the first real asset for the Viale Del Fante company which will thus also have a “concrete and quantifiable value” within it.

«Today I am very happy. As a fan and as President I feel responsibility. We reach a result a year and a half after the realization of the project. Something really important is being achieved and something that I hope will make us proud ».

“Rosanero friends? Like me and Tony Di Piazza are the ones who believed in the growth of Palermo. Their money will go to the sports center. To these are also added those that will arrive with the various loans. Once the ribbon of the sports center is cut, we will start with the other projects. It has a value for the long term ».

“Neither Tony Di Piazza nor I want to waste money. If something is needed for the team, whoever has the skills will decide. Relationship with Tony Di Piazza? We clarified about the sports center and others not. We will deal with the other points gradually ».

Share this:
Highlights of a weird Palermo 3 – Viterbese 3
Foggia vs Palermo 14th Lega Pro. Hope for our results!
View more