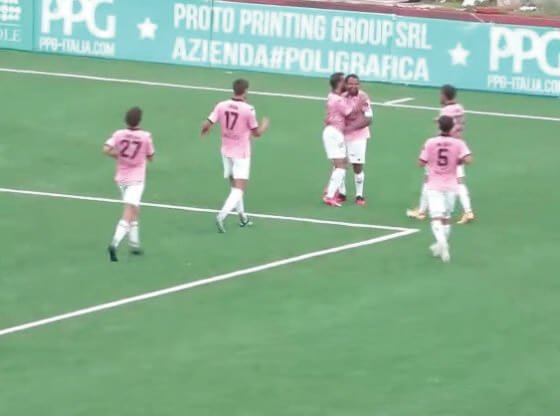 The first ball of the match is managed by the Campania region. At 2 ‘there is the first foul of the match and it is in favor of Palermo. Santana shows up on the ball and spreads out to the right where Floriano is, the former Bari starts a cross for Lucca, who claims his centimeters and heads in, bringing the rosanero ahead at 3 ‘. At 5 ′ Pacilli tries to get to the bottom, but in front of Somma, the two come into contact and the player from Campania has something to laugh at the defender of the Sicilians.

At 11 ‘game stopped because the defender Hadziosmanovic, who needs medical attention, remains down. At 14 ‘Palermo doubles, again with Lorenzo Lucca. Santana widens on the right out for Almici, who needs a perfect cross for the head of Lucca, who must push in and find the double.

At 18 ‘the hosts try to react and do it with Pacilli. The number 29 of the Casertana is placed in the center of the rosanero area, receives a cross from the left and tries the shot on the fly, his conclusion is inaccurate and the ball ends up on the bottom. Avella says no to Valente.

The rosanero winger in the 22nd minute, after Rosso’s mistake, retrieves a ball in the middle of the field, pushes forward and focuses by kicking towards the goal, but the goalkeeper from Campania rejects. Red tries from outside the box at minute 25. The idea of ​​the midfielder is good, a little less the conclusion that ends in the sky. The Sicilians now run the ball and try to keep the pace low.

At 36 ‘first real opportunity for the Campania region. Hadziosmanovic jumps Valente and reaches the bottom, the former Monopoli kicks at the near post but Pelagotti is careful and rejects a corner kick. 1 ‘still dangerous Casertana. Del Grosso serves a cross in the center, Pacilli receives the ball and tries to turn around, but without being able to find the goal defended by Pelagotti.

Cuppone shortens the distance and reopens the match. Three men try to steal the ball from Pacilli, who free for Hadziosmanovic with the heel. The defender crosses for Cuppone, who in the 43rd minute stands higher than all and scores the 1-2 goal. The rosanero at 45 ‘immediately put two goals ahead between them and Casertana.

Santana serves an assist for the former Torino striker who kicks towards Avella’s goal, the ball is deflected but still ends up inside. There is no more time and the first part of the race ends with the result of 1-3.

Filippi immediately changes something and removes Odjer from the dispute for Marconi, with Palazzi returning to midfield. At 48 ‘another rosanero change. Broh on the pitch for Luperini, perhaps not at his best. At 55 ‘Palermo dangerous with Santana. Lucca acts as a bank for the Argentine, who receives the ball on the edge and kicks towards the goal defended by Avella with his right, but his conclusion ends wide. Santana serves Almici who tries to start on the right, but finds Cuppone and recovers the ball.

Rossoblù in difficulty in managing the ball, with Palermo pressing despite the two goals advantage. Floriano, in the 64th minute, tries to jump Ciriello who dirties the ball and is forced to send it to a corner kick. Santana shows up on the ball, the Argentine serves Almici stationed at the edge of the area and kicks, his conclusion is busted. Double change for Sicilians. Filippi takes off Santana and Floriano from the field at 66 ‘, putting in Kanoute and Rauti.

At 70 ′ Cuppone test from afar. The attacker’s conclusion goes out abundantly. At 73 ‘Kanoute, after the corner from Casertana, starts again and enters the area serving Rauti. The 2000 class kicks towards the door, but Avella responds present. Stay down Accardi who needs medical attention. The rosanero defender comes out of the field limping but seems ready to return.

Palermo who has some difficulties in managing the ball, but Casertana is unable to take advantage of it. Penalty kick for Palermo in the 87th minute. Avella on exit hits Kanoute, who goes down and earns a penalty kick. The former Catanzaro goes to the spot, but hits the post to Avella’s right. Rosanero who will end the challenge outnumbered. Almici commits a senseless foul on Rillo, who was in front of his bench and could not have done anything but the former Verona overwhelms him and is kicked out.

Casertana shortens to 2-3 with Buschiazzo at 91 ‘. A goal that arises from the development of the free-kick that led to the expulsion of Almici. The hosts go forward from the left with Matos that a cross for Buschiazzo that pushes into the net. 5 ‘of hope for Campania who are looking for at least equal.

There is no more time. Palermo suffers in the final minutes but manages to return home with three important points in the playoff key.