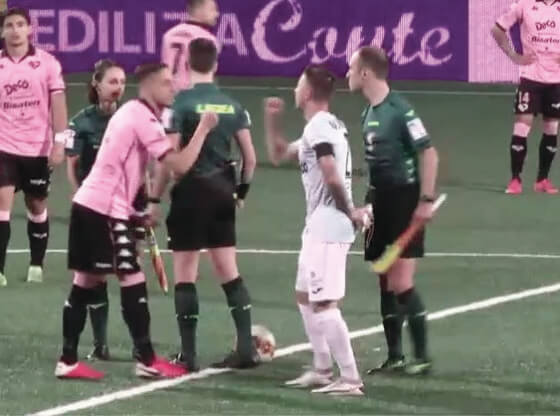 Filippi for this challenge confirms the 3-4-2-1 but has to deal with the absences of various elements, in particular in midfield where Odjer and Martin have stopped in the last few days. Rauti still forward, with Floriano and Broh, who will play more advanced than the usual position. The hosts line up with 3-5-2.

FIRST HALF Virtus Francavilla vs Palermo:

The first ball of the match is managed by the hosts who will attack from left to right, who take the field with the usual shirt with blue and white stripes, shorts, and white socks; the Sicilians in the field with the pink shirt, shorts, and black socks. The hosts also try to break through on the right side but Accardi slows down the action. Rauti tries in the 3 ‘, the rosanero striker focuses and kicks with his right, but the ball is countered by the home defense.

Palermo forward at 5 ‘, Floriano crosses from the left to the center of the area but Doda does not arrive, the ball crosses the whole area and ends up on the opposite side where Doda is actually winning a foul. Lancini touches the goal of the advantage at 6 ‘. Floriano serves De Rose positioned at the edge of the area, the former Reggina serves Lancini who is not very precise with his head.

Minute 11, De rose receives the ball and tries to wedge himself into the Francavilla area but is brought down, for the referee, there is no doubt, and whistles a free-kick. On the ball goes Floriano who prepares to kick with his right, but the ball is lost on the bottom. The first corner kick of the match for the hosts at 16 minutes; Maiorino appears on the ball, but first of all, comes Marong who eases the danger.

Error of the hosts at 17 ‘. Vazquez overturns the front and runs ball and chain, reaches the edge of the area, and serves Maiorino who closes the platter too much and sends out. Floriano at 21 ‘Cosmo lands on the edge of the rosanero area and the Apulians earn a free kick. Nunzella takes charge of the service but he too makes a mistake by sending the ball out.

Francavilla ahead in the 21st minute. Maiorino serves Carella who is found on the right-wing, jumps the direct opponent, and serves Nunzella who is in the center of the area and just has to push on goal. Palermo now tries to regroup to find the equalizer, but it doesn’t seem easy because the hosts close well. Palermo draws in the 29th minute. Broh serves De Rose who first crosses to the far post where there is Valente who heads over Crispino.

Palermo overturns the match at 42 ‘. Broh’s cross from the right, Valente coordinates on the fly, and bags behind Crispino bring Palermo ahead for 1-2. Rosanero tries to repeat the goal again looking for the 3-1, always with Valente at 43. The winger in the area jumps the opponent and kicks, but Crispino sacrifices himself and tells him no.

It ends without recovery and with the result of 1-2 the first half between Virtus Francavilla and Palermo.

Virtus Francavilla vs Palermo, the photos!

SECOND HALF Virtus Francavilla vs Palermo:

A double change in Palermo sends Silipo and Saraniti to the field, for Rauti and Broh. The hosts also made a change by removing Di Cosmo from the dispute and sending Tchetchoua onto the field. The Sicilians get off to a strong start, Silipo positioned on the right side, unloads for the rushing Doda who tries a cross in the center of the area, but the trajectory is wrong.

Pugliesi trying to break through on the right out, Tchetchoua receives the ball in the 50 ‘but is knocked down by Accardi and wins a foul; on the developments of the same Maiorino crosses in the center and the ball deflected by his partner touches the post to the right of Pelagotti.

At 56 ‘Floriano tries a restart on the left side, Celli has to keep his shirt to stop him and the former Bari ends up. Palermo still scoring in the 60th minute. The hosts try to get out with the ball, Celli misses the pass and Saraniti intercepts the ball, the former on duty serves Silipo who centers and beats Caprole bringing his team to 1-3. Rosanero close to the 1-4 goal.

Valente serves Santana back who kicks with a sure shot, but the ball goes out at the bottom. New opportunity for Palermo at 65 ‘. Santana serves Saraniti who unloads for Valente who runs ball and chain, reaches the edge of the opponent’s area to try a right-footed turn, making a lot of mistakes.

A double change in the ranks of Virtus Francavilla. Colombo at 67 ‘sends Delvino and Calcagno to Castorani and Celli. At 69 ′ Filippi calls the author of the brace Valente back to the bench, leaving room for Kanoute. The pace has dropped a lot, also because Virtus Francavilla has nothing more to ask from the championship and Palermo reserves the energy for the first round of the playoffs.

There are 10 minutes to the end of the match and Palermo still manages the ball keeping the pace low. Last change in Palermo at 86 minutes. Lancini leaves the field to Marconi. The last change also for Virtus Francavilla at 87 minutes, the season ends here for Vazquez who is replaced by Adorante.

The Virtus Francavilla-Palermo match, after 3 minutes of recovery, ends with the result of 1-3 for the Sicilians who, thanks to the 2-2 draw of Foggia against Catania, earn a seventh-place and will face Teramo in the first round of playoffs.