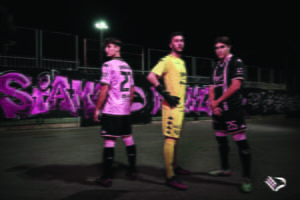 Vintage and a tribute to Santuzza, here are the new Palermo Kappa shirts for the 2022-23 season

New season, new jerseys, new reinterpretations of pink and black. The Palermo jerseys for the 2022-23 season were presented at Palazzo Chiaramonte-Steri, the seat of the University of the Sicilian capital.

The uniforms (Kit Gara Kombat) signed by Kappa were created in collaboration with the Palermo agency Gomez & Morticia, the designer Luca D’Agostino (who oversaw the creation of the mural on the gate of the Renzo Barbera stadium), the Kappa R&D center, and the special participation of TvBoy, one of the most famous street artists in the world, who was inspired by the Patroness of Palermo, Santa Rosalia.

The Viale del Fante club unveils the jerseys ahead of the opening of the new season which will officially kick off on Sunday 31 July with the Reggiana match against Renzo Barbera in the preliminary round of the Italian Cup. Then, the debut in the Serie B championship with Perugia, also at home, on 13 August.

Thanks to the collaboration of the coordinator of the Palermo Museum Giovanni Tarantino, the path started in 2019 continues, or in the season of rebirth. This path combines elements of the club’s over one-hundred-year history and choices devoted to innovative design. After last year’s two-tone, full pink returns for 22/23 with black references.

The first shirt is inspired by the models of the 1950s

The main uniform model for the 2022-23 season features a wide collar held together by laces that recall vintage aesthetics and in particular models used in the late 1950s when the Favorita warmed up with goals from Ghito Vernazza. By contrast, the historical component of the collar meets the modern one of the texture of the knit: a “glitch” effect that breaks down and mixes different shades of pink, with a nod to digital technology. Once again, the Palermo shirt is therefore a bridge between past and future.

The second shirt, on the other hand, is a tribute to the presidency of Renzo Barbera and in particular to Palermo 1973-74 who, from Serie B, with a memorable ride, won the final of the Italian Cup then lost (in a mocking way) on penalties against the Bologna.

A reference, moreover, to the goalkeeper’s shirt, dressed among others by Angelo Bellavia, and by Giuseppe Governale, brigadier general of the Carabinieri, former goalkeeper of the rosanero youth, who donated his shirt to the Palermo Museum.

Palermo pays homage to Santa Rosalia with the third jersey

The third jersey is an absolute novelty, created thanks to the design created ad hoc by the Italian artist TvBoy, one of the most well-known street artists in the world, who was inspired by the Patroness of Palermo, Santa Rosalia. The skull and roses, emblems of the religious figure, inserted in a context of ornamental motifs in the Baroque style, a real cult in the Sicilian capital, and classic iconographic elements of the figure of the Saint.

A uniform totally inspired by the soul of Palermo and the Palermitans, to further increase the team’s already strong bond with the territory and to increase the sense of belonging of a squad with great ambitions. For the occasion, the artist also created a mural with his famous Rosalia in the tunnel of the Renzo Barbera stadium.

PreviousSerie B, Season 2022/23 the CalendarNextThe Palermo Serie B debut after 3 years, Corini calls fans!
Back to top