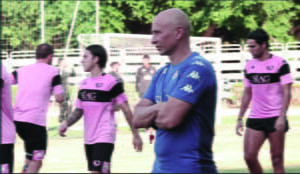 Palermo makes his Serie B debut after three years, while Corini calls the fans together!

The new coach does not speak on the eve of the rosanero’s debut in Serie B and after his first week at the helm of the team, but del Grifo had already said at the presentation. Here are his words There will be no traditional and classic pre-match press conference by Palermo coach Eugenio Corini in view of the new club’s debut in Serie B and after the first week of the coach at the helm of his new team.

But Corini had already said something about the next opponents on Tuesday, after the first two training sessions at the helm of the rosanero and still with De Rose at his disposal, during his presentation press conference. Here are what his words were.

Perugia is strong, Corini said: We faced them in Brescia three months ago in the playoff preliminary (won by Corini’s Brescia 3-2, ed). The structure has remained the same, indeed our opponents will recover important players, they have a coach I know well (Fabrizio Castori, ed), who knows the category and who has always achieved the objectives set. It will be a team ahead of us. We will have to be reactive, we will be reactive in building the squad for the championship and immediately understand who is ready to play a great match against Perugia.

There are points up for grabs and you have to do everything to get them right away, even with a spirit of adaptation. A spirit of adaptation to the difficulties that this team has already shown to have in the last season in which it has often shown that it knows how to bring out the strength to recover from disadvantaged situations and go beyond difficulties. And in this, we too will be very good. About 5 thousand tickets have already been sold, and over 10 thousand subscriptions subscribed. The fans are ready to do their part. Corini had also talked about this.

I ask for help from the fans who will be fundamental – were his words – in difficulties you need to be accompanied by those who support you. They accompanied the team in B with their support and together with their energy, we will have to overcome the difficulties. I always say this: in the 95 ‘you push the team, in the end, if you are not happy with what you saw, whistle. But within each of us as long as there is hope we can achieve our goal. The help of the public will be decisive and can subvert the forecasts.

On Tuesday, regarding the seasonal objectives, Corini confirmed the line of the company: consolidation of the club and maintenance of the category without extinguishing the possibility of dreaming.

Dreams – he said – and I don’t want to be Gigi Marzullo, they help to live. I brought a very large suitcase, full of dreams and goals. Dreams and goals to make them come true there is a lot of work to do. It is right that the fan dreams, but it is right that those who have responsibility speak clearly. We have to take one step at a time, not project our thoughts too far. Today my dream is to see the stadium full and win with Perugia. In March, no one here thought of going to Serie B, but with work, Palermo turned his dreams into reality. Our dream is there and we will cultivate it as our ambition with everyday work.

About 18,000 spectators are expected, and the technician and the new ownership that has yet to settle have asked for patience, cohesion, and encouragement until the last second. The ‘Genius’ has just arrived and wants to cancel those 50 unfortunate days (but they were desperate conditions) in which in 2016, he accepted the pink bench in Serie A after the 7 consecutive defeats of De Zerbi, until he inevitably clashed with Zamparini and gave the resignation.

THE PROBABLE FORMATIONS OF PALERMO-PERUGIA