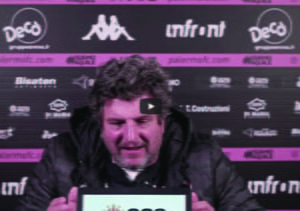 Mr.Baldini, Conference before the match against Vibonese

The team led by Silvio Baldini returns to the “Renzo Barbera” stadium to face the Vibonese on the occasion of the 30th matchday of group C of Serie C.

All week the boys worked hard, with the bitterness of not having deserved to lose in Francavilla. They worked hard, I don’t think they will underestimate tomorrow’s match. 99% I’m sure no one will snub the race. At this moment I don’t see this possibility of underestimating the opponent. We have to play against ourselves to have a great improvement, we don’t have to play against our opponents because we would have a less clear improvement. I tried to analyze moment by moment, we have been training since Monday and I saw the guys with a lot of anger and determination. If this does not happen tomorrow it would be unthinkable for me. They worked hard thinking about the opponent on duty, we will go out on the pitch already knowing what the game will be like.

The Tuscan coach also focused on the conflict between Russia and Ukraine: We are all interested in what is happening. We too are thinking of a problem that may involve humanity. Nobody wants war, it is unthinkable to use violence in 2022. The greatest crime is not giving culture to people in order to understand where the good is and where the evil is. Precisely in football that seeks to isolate Russian athletes, these are initiatives that could be right but the most unfair thing is not to fight so that the peoples do not give a culture. The real war is not equipping people to understand themselves and their surroundings. It is important to know that the world is not just sport, the latter is only a part of our life. The most important thing is the rights that everyone must have and no one must allow it to happen that these things are taken away.

As a goal, we have made it our mind to get as high as possible – explains Baldini -. If the team performs like in Francavilla, the game cannot always go badly. The episodes we reviewed with the team showed that there was a handball and we did not test. I told the kids not to protest, we are fighting for the goals of the city. We must have no regrets in this league. The fans who follow us want to be represented for where they were born, not in making or not scoring. The spirit put on the pitch, even in difficulties, gives pride to the fans and will allow us to reach the goal we have set ourselves.

I have to take into consideration these players like Buttaro or Dall’Oglio, they have shown that they are useful to the team. Tonight after training I will decide who will go on the pitch. From Oglio, when he is 100% well, I think he will always play, it is impossible to leave out one of the best players in the Palermo squad in my opinion. He has important technical and tactical qualities. We took a big step forward – continues Baldini -, we played a game in which we immediately said injustice and we wasted many situations to score goals.

We can no longer afford to make this mistake, but the important thing is not to miss the performance. In the handball of the striker who scores, I asked the players not to complain so as not to hide behind this protest. We must represent the culture of the Palermo fans. If I can get inside their heads and their hearts then something important can be done.

FANS AT THE “BARBERA”

Why people aren’t attached to Palermo right now is the question I can’t answer. I don’t know before and during what are the reasons that have alienated people from the team, I’ve only been here for a month and a half. I am 100% sure that if Palermo manages to play important games during the playoffs to launch us high, Barbera will be as full as when there will be the national team.

Are we dependent on Brunori? I don’t think so, scoring happens to everyone. I believe that if the team moves with synergy, anyone can score. We have midfielders who in the offensive phase close the action. There are many possibilities, even with outsiders.

VIDEO / Mr.Baldini, Conference before the match against Vibonese