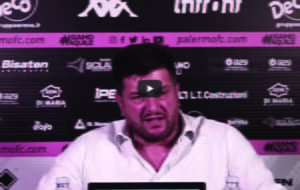 Ninety minutes to glory. The last match of the season for Silvio Baldini’s team is worth the promotion to Serie B.

After the partial result of 1-0 arrived at the “Euganeo” stadium in Padua in the first leg, the rosanero will play everything in front of their own audience at the “Renzo Barbera” stadium. The Tuscan coach of the Sicilians, who spoke at the press conference on the eve of the match, talked about the feelings and the situation at Palermo.

We did the normal things. In these playoffs, we have faced strong teams and we always won in the first match, so we basically said the same things. We must let ourselves be carried away by this enthusiasm, aware that this time we could rejoice at the triple whistle. We have to be confident and calm, the numbers speak for us with 5 wins and two draws in these playoffs. They are comforting data, the boys are convinced and they are there. We have to put our hearts into it and run as much as possible.

We knew that Brunori had to get married and could not give up – explains Baldini -. Things could happen that would have broken the love between him and his wife so we are all happy for him. Today he trains and tomorrow he will play with more confidence and serenity. Football is made up of people’s emotions, for example, we never retire. If he wasn’t going to get married he couldn’t be himself, he couldn’t be happy. This is the fairest thing we could have done

I haven’t studied anything, we have to play like in the first leg ”. The rosanero coach has clear ideas on how to face the biancoscudati: “We have to put our hearts into it, then the ideas on the pitch arrive. If Palermo had reasoned with the modules then it would have gone out. Instead, we have reasoned thinking about performance and looking for something that goes beyond the result. I understand that some speeches I make may annoy some heads of ca ** o, but given my age, I don’t care and I just talk like that because I know that I reach the hearts of my players and the people of Palermo, who Is the most important thing. We would not have beaten the record of spectators present against Feralpisalò at the ‘Barbera stadium

There will be no changes, the same players will play this final – continues the coach -. We have no alchemy to field in our case. Weekly work is what makes you express on Sunday and these guys have understood it. We must not be afraid of anything and we must have the courage to put on the field to give great joy to the people of Palermo. In life you never know what happens, we know that life is made up of coincidences. I want to think that my players, as they have shown, can go beyond the result tomorrow.

We know that the match could go into extra time and we have also analyzed this possibility with my staff. It would be remiss not to think of such a thing. We are convinced that in 90 ‘it will all be over but since we are not presumptuous we have also thought about the additional hypothesis.

On December 26th Castagnini called me to coach Palermo and that was the best day. I knew of the difficulties but I also knew that we should not give up, especially after having had this chance for 18 years. Moments aren’t bad when you don’t win, but when you see that a team doesn’t see themselves in what they do. The most difficult moment does not exist in my opinion. I think tomorrow will go well, however, it will go I’m happy because I have played my chances. I don’t even want to think about what might not go tomorrow.

I don’t prepare myself first for what I have to say, tomorrow night before the game what I hear I say. I will sleep like every other night, but I know the importance of what is at stake. I usually wake up very early and in the evening as early as 9:00 pm I usually go to sleep. But it won’t be Padova that won’t let me sleep. At most I might be sorry for the jackals who will try to enjoy our bitterness, for the rest, I don’t care. What interests me is that through work and faith we must try to go beyond the result. Seeing people who love you and who thank you is the best thing. Seeing people telling me that they’ll love me anyway is the best thing, also because I’m not looking for anything else “, concluded the coach.