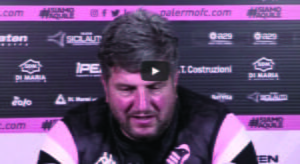 Full stadium, high enthusiasm: Palermo-Triestina, return match of the first round of the national playoffs for the match towards Serie B which will be played on Thursday 12 May at 20.30.

numbers are all for the rosanero: a record of fans but also results. Palermo goes to the quarter-finals if they win, draw or lose by a goal. Thanks to the third position in the regular season which offers advantages over those who rank further behind.

Baldini presented tomorrow’s challenge: “Full Barbera, beautiful sensations. I and the players wanted it. A beautiful feeling, we hoped to have a stadium as seen when the national team arrived. I didn’t expect a full house for this match, it’s the best for those who do this job to be lucky enough to experience these emotions “.

The rosanero coach continues: “The club is doing things in a big way, to try to bring Palermo back to the levels of the past. We gave it our all, I always told the boys that we should bring the people back to the stadium by showing that we have a chance to win. We managed to make this happen, now we have to follow it up ”.
Palermo recovers Accardi and Soleri

Silvio Baldini talks about the conditions of Accardi and Soleri who will be called up: “They trained separately – said the coach – they have ailments but they are available, there are no problems. They tried to be careful, they are 100% available ”.

The coach goes on to talk about the warned players and does not make any calculations: “Before trying to manage the situation, I would like to be sure of the next round. These emotions are gifts that football gives you. the boys have to enjoy this match with great serenity, without pressure, and having great self-esteem. If there is a full Barbera it is because the players have convinced the people that there is really a chance to win these playoffs “.
“Pelagotti and Massolo, two holders on goal”

Silvio Baldini talks about the line-up which, however, has not been revealed. “I have 23 players, all of them have trained well and are in good condition. Those who have played less may have some difficulties with the pace, but mentally they are already because in these two months they have all been involved and they are all ready to start from the beginning. Until the result is safe, I will rely on the players who up to now have given more guarantees ”.

And he concludes: “Pelagotti or Massolo, until tomorrow I will not say the formation, but I will try to focus on the players who have given me more guarantees. I feel that we will reach the end, but I know that I can count not only on the owners but on all the other guys. Pelagotti and Massolo are two owners, but I will make my choice based on how I will see them “.

Here are the probable formations of PALERMO vs TRIESTINA