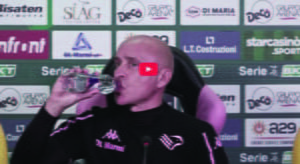 Benevento Palermo 02/12/2022: Eugenio Corini intervenes in the press conference to present the away match in Benevento,

The last two defeats have hurt us, the team hasn’t been rewarded. In the last game, it wasn’t just our responsibility. Gomes has become very important to us, he’s not just a matchmaker, he also gives us pace in the game. Stulac? We will have three games within a few days, we are working on more solutions, they can also play together

The pressure is always there, even when it comes from a win. We need balance, we didn’t get excited after the 4 useful results, and we mustn’t get depressed now. In the two games, we could have had a positive result in both matches. With Venezia, we have our responsibilities, but other factors played against us

Venezia did better than us at the end of the first half, we never managed to finalize and conclude. They hurt us in the counterattack, we did well both at the start of the first half where we managed to win a penalty which was then taken away and also in the second half. I ask Valente for a different job than Di Mariano, he is doing what he has to do

Benevento played very well against Reggina, the Calabrians play very well in the restart, and we know something about it

Brunori’s attitude is to attack space, so we play accordingly. With the midfielders we have the idea of working with Di Mariano to get them to enter, Segre has gone to the conclusion several times. We work to be more effective in the goal area. Market? It’s far away, but there is an idea where we can go to work

Penalty taker? I spoke to Brunori, he is serene and aware. He will remain a penalty taker, if he has any problems he will come and tell me

Median revolutionized 5 minutes from the end? It only makes sense in a small part of the match, because having more offensive drive, I needed two fresh midfielders to cover the defense. It went well in Cosenza because we found the penalty and with Venice as well because we scored the equalizer, then disallowed

Benevento is a healthy and growing team. We are level on points, we are ready to go there to play a great game even if they come from two consecutive useful results and us from two defeats