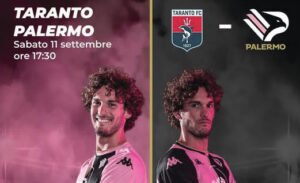 Palermo coach Giacomo Filippi intervenes at the press conference to present the match against Taranto.
The rosanero are returning from the draw in the derby with Messina.

The team trained very well. Valente is at 100% and he will be part of the match, I don’t know if he will start from the beginning, he’s fine. In the derby there were technical errors, we made a collective mistake in our attitude. The Palermo shirt affects the responsibilities of the boys, who however know the situation, it must be a reason for pride. You have to be calm and play with a free mind, mistakes are made.

Saraniti will have great motivations. We are not facing only him but all of Taranto, who are doing well and are confident. We have to be good at reading the game, which is not easy even for the big teams. Taranto is an extraordinary square that thrives on football; it has a very warm audience, I played it for two years and I know it well. We must be ready to find a warm climate

We worked a lot on the aspects that went wrong in Messina. Doda and Soleri are doing well and can be part of the game from the first minute, they train well like the rest of the group. When a coach has a choice it’s a good thing

We must keep short distances between departments, as it did not happen in the first half in Messina, due to excessive collective and departmental generosity. We took action on the mistakes made. Emergency in defense? I don’t notice it, the men are there. Those that are there are enough and they advance

We always play to win, but it is natural that there are also opponents who sell their lives dearly. We have to work more than others on the psychological aspect. If you give your opponents a time then it is difficult to resume the game. We have to be good at fighting minute by minute to make the race our own.

Taranto for me is a beautiful city with warm people. Coming back is an immense pleasure, since I left I have not returned as an opponent. The team is well prepared, there are players of absolute value in all departments. I like how he plays and how he plays the games, facing the races openly. We must be good at understanding the moments.

The Vibo field was not in great condition but it was possible to play. The wrong approach to the game is the main mistake, this has led us to stretch, it is on this aspect that we have to work a lot. Accardi should return to the group in the next few days partially, in ten days he could be at full capacity. Valente and Giron together? It is a solution, Valente can play both on the right and on the left. We’ll see how the match goes.

Here are the probable formations of Taranto vs Palermo 3rd match valid for the Serie C 2021/22.
(Saturday 11 September, at 5.30 pm, “Erasmo Iacovone” stadium in Taranto)

The defense emergency does not end, even on the Palermo 3rd match of Lega Pro.
Giacomo Filippi has several options in mind for the match in Taranto, starting from the defensive department where Accardi and Buttaro continue to be absent (Peretti has been added to the absences). There could be the return of Valente, in attack paws Soleri.

PreviousVirtual membership 2021NextHighlights Taranto vs Palermo, 1st defeat of the season
Back to top