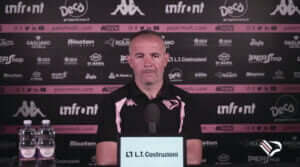 React immediately after the defeat of Taranto. Palermo is looking for answers in the Italian Cup Serie C and the rosanero coach Giacomo Filippi presents the themes of the match against Monopoli (leaders of group C in this start of the championship) at a press conference.

“We have lost our balance with Taranto and we have worked on it these days, also because tomorrow’s match is very important. The changes? I changed the game system, inserting another striker and removing a defender, moving to 4-2-3-1. I did it because we had both Perrotta and Lancini booked “.

“Monopoli is first with merit, they work well and are well placed on the field. We play to get through the round: the Italian Cup is a goal, as I have been saying since the beginning of the season. I will field the best line-up, even if there will be some turnover in the right roles “.

“Tomorrow I expect a group response. Playing in the department, for the teammates. The boys also gave their soul against Taranto, but little in the group and more in individual form “.

“Tomorrow’s game is also important for those who find little space in the league to play. It serves to put minutes in the legs and will be an excellent test for those who are further behind in the condition ”.

“Going back to the back four? No. It is true that Lancini and Peretti are missing, but Accardi and Buttaro are back. We must insist on our dynamics, which we have been working on for months. For now, let’s continue like this ”.

“Alternation of goalkeepers? Tomorrow Massolo will play, because he is very good, he trains very well and deserves to play ”.

“Lancini was sent off, but the match against Taranto was colorless in general for everyone. If he is only one to pick, the others are able to make up for it: the proof was insufficient for everyone, including me ”.

PreviousHighlights Taranto vs Palermo, 1st defeat of the seasonNextHighlights Palermo vs Monopoli, 2nd round Italian Cup - Rosanero Won
Back to top