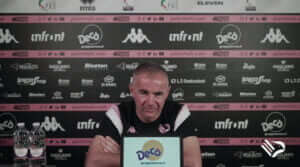 After the equalizer obtained against Avellino, Palermo test the reaction in the Italian Cup. The rosanero coach Giacomo Filippi presents the match against Catanzaro at a press conference.

The truth is that the two away matches are a bit complicated from a logistical point of view, but we will go with the entire team at our disposal and we will try to exploit the fitter men. We will go to Catanzaro to go through: this is our goal.

Whoever has played less in the last period will certainly be in the game. But having a large and qualitatively balanced squad changes little. Surely ours will be a competitive team that will aim to win.

To beat a direct competitor? An important test, but sometimes you don’t beat a team by episodes that unfortunately change the fate of a race or season. We are aware that we are on par with Catanzaro, Avellino but also with Bari despite the staff. We will be ready to counter and impose what we know.

Tomorrow for Massolo. We played head-to-head matches at par and with the right attitude, trying to win until the end. Every now and then it is right to look at the glass half full. We know what we are worth and we must play with this in mind.

Floriano did not play in the last few games by technical choice, he did not take over due to unpredictable situations in the game. And sometimes you have to change the script. I know he’s fine and he knows he has my respect. There is that some games do not start in the starting line but many races are resolved in the race.

Soleri trains to the maximum and with excellent quality. Unfortunately, someone has to stay out but for me Edo is exceptional.

Peretti is disappointed because he knows he didn’t cause the penalty. It is true that he made a small mistake on the raise, but he did not commit a penalty. Unfortunately we are paying the consequences of an arbitration oversight. He deserves my trust: he is a boy and it can happen as it can happen to anyone. He has to play with his head held high.

Getting to know Catanzaro is an advantage. We know how to prepare for the match. They are very solid and it will not be easy to unhinge them in defense but we will do everything to make the game ours. We tried both three and four, we will see what to choose also by virtue of men. We’ll see tomorrow.

The coach rests the most used players and gives minutes to those who are finding less space.
In all likelihood, you should return to the three-man defense module for this 3rd round Italy Cup.

DEFENSE: Massolo is in the goal while in the defensive trio there is space for Marong on the center-right, Peretti as the central pivot and Perrotta (who comes from two days of disqualification) on the center-left.

MIDDLE: Almici returns to occupy the right wing, as does Valente on the other side. De Rose, substituted at the end of the first half in the match against Avellino, should play from the first minute; next to him space for Odjer.

ATTACK: Floriano and Soleri should be deployed from the first minute. The other place on the frontline could be occupied by Fella, who played “only” one hour against Avellino.

Here are the probable formations of Catanzaro – Palermo, 3rd round Italy Cup, match valid for the round of 16 of the Italian Cup Serie C 2021/22 appointment Wednesday 3 November, at 2.30 pm, “Nicola Ceravolo” stadium in Catanzaro