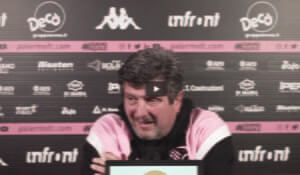 Mr.Baldini, Conference before the debut at home against Monterosi Tuscia

Silvio Baldini is ready for his debut at Barbera. The Palermo coach spoke at a press conference to present the match against Monterosi, valid for the 24th day of the championship. The rosanero coach, in addition to pushing a lot on the concept of performance (“If there is this, the result comes as a result”), also spoke of Damiani’s possibilities to enter even from the beginning, of the Brunori-Soleri dualism (” They can coexist ”) and the one between Massolo and Pelagotti, admitting that he has not yet chosen the owner for tomorrow’s match.

I have great feelings for tomorrow’s match. Back to Barbera? It has always been in my thoughts, when I went up to Monte Pellegrino I hoped so much. This is a prize to my life, not my career. I hope to always remain myself and to try to give the team the maximum personality. We represent a city that has a certain culture and a certain way of seeing football.

Compared to Catanzaro, I want the team to arrive in the shooting area with better phrasing. In football, whoever scores goals wins.

From Dall’Oglio? We preferred to let him rest for this quadriceps contraction. He’s better, we’ll evaluate tonight. The draw in Catanzaro is the result of a great performance, we played it without awe. Lost opportunity? When you don’t win it’s always like this, but seeing what we have done, I have a lot of confidence.

From tomorrow until the end of February we will have 8 games. I will choose from time to time the ones that are better off. Then it is normal that there are players who are able to give something more temperamentally, also based on this I will make choices. Brunori and Soleri? They will have an excellent career, they can coexist, but it will take work.12.22 – “Luperini is useful for the cause of Palermo, but I believe that in the squad we have several players who can play that role. Massolo or Pelagotti? I will choose after a meeting with the goalkeepers.

Soleri can play outside at Mandzukic or Eto’o, but at the moment we can’t do too many experiments. It will be a more ongoing solution, I haven’t seen it from the start, at least for now.

We will attack the field, I think they will play as a throw-in and there will be few spaces. I believe my team is strong and that tomorrow they will give their soul to achieve something positive. Performance is a must and with this, you can also win.

We must always be optimistic, we don’t have to think about the result but about the performance. Damiani has to prove his worth and that he is in better shape than others. He has the opportunity to play the starter.

Market? I came and accepted everything there was to accept. I’m happy, if we can improve, Palermo doesn’t need to buy. I want to be considered as a fan who has the opportunity to coach the team of his own city.

Damiani can play in all areas of the pitch, but the others are good too. This makes me happy, whoever plays will bring us quality and quantity. Comparison with Corini? He has to try to achieve that level.

VIDEO / Mr.Baldini, Conference before the debut at home against Monterosi Tuscia

The probable formations / Mr.Baldini, Conference before the debut at home against Monterosi Tuscia
Palermo-Monterosi Tuscia, scheduled on Sunday 30th January 2022 at 17:30, at the “Renzo Barbera” stadium.