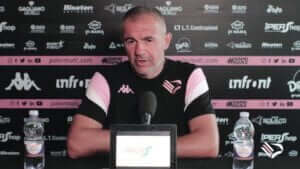 The Acr Messina-Palermo match is scheduled for Saturday afternoon at the “Luigi Razza” Stadium: kick-off at 17.30

After the success of the first day against Latina, Palermo is preparing to face the derby against ACR Messina. The challenge, valid for the second day of the Serie C championship, will be played in Calabria tomorrow at 17.30.

The rosanero coach Giacomo Filippi presented the match at the press conference. “It’s a game that needs his preparations. In addition to the technical and tactical one, also the mental one. We have worked from this point of view. The boys are ready. I am convinced that the team will perform well. “

Palermo is looking for an encore in the match scheduled against Acr Messina. On Saturday 4 September, at 5.30 pm, at the “Luigi Razza” Stadium (and not at the “Franco Scoglio” due to problems of viability), the challenge valid for the second day of the Serie C-Girone C championship will be staged. Giacomo Filippi will therefore return to the field after the victory won against Daniele Di Donato’s Latina on his debut at the “Barbera”. Two goals from the spot, mechanisms certainly to be perfected, a moral success in view of the next official match.
Be the first to comment

In the presence of Salvatore Sullo’s team, Filippi and his staff will once again have to do without Nicola Valente and Andrea Accardi, struggling with muscle discomfort. The ex-Carrarese winger – solved the foot problem that forced him to the pits – continues with the fitness program and could be available for the match against Taranto. Alessio Buttaro, disqualified by the Sports Judge for three days, and Massimiliano Doda, called up by the National Under 21 of Albania will also miss the derby. Ivan Marconi will return to the squad. On the latest arrival ,Marco Perrotta completed the Covid process (swab, serological test) and left for Calabria with the rest of the team.

Let’s try to formulate the most plausible hypotheses under consideration by the coach originally from Partinico. Obligatory choices in defense, where the emergency situation does not end.

In front of Pelagotti, Marong, or Peretti, Lancini and Marconi will make up the defensive line; Almici and Giron will act as tall exteriors with De Rose and Luperini tandem of interiors in the midline. Finally, six players competing for three jerseys: Dall’Oglio, Floriano, Silipo, Fella, Brunori, and Soleri will compete for ownership.

Mr. Filippi Conference before the 1st Sicilian Derby – The video

THE EXUBERS AND THE ARRIVAL OF PERROTTA

Nothing to do for the players outside the squad. The technician closes the door without second thoughts. “The redundancies are not on my technical list. I have decided to exclude them from my choices. Since I respect people, I cannot do the opposite of what I said a month ago. It is useless to go back to it. I’m only sorry that they haven’t found accommodation yet ”.

Finally, a comment on the latest arrival of the transfer market, namely Perrotta. “Marco is a player that we have been looking for for a long time and that we wanted, both for technical and physical characteristics. He has completed the missing box in the duplicate, which he will pair up with Marconi. It is normal that, during the championship, there will be defections and therefore we must be covered, without having problems with numbers “.

Here are the probable formations of the match between Acr Messina and Palermo the 1st Sicilian Derby 2022.