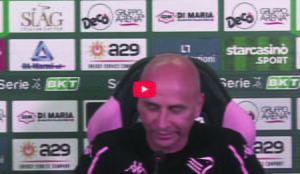 Palermo Cittadella 22/10/2022: For Corini important signals have arrived from the match against Pisa, especially for the first 75 minutes, but with the Cittadella we must bring home the full result. The coach also talked about the defense, saying that in any case, the team has improved since the first games in which players like Gondo and Odogwu suffered so much.

“So many goals conceded? We must evaluate how they arrived. However, we concede less than the first races. We certainly could have done better, especially in Pisa’s second and third goals: we have to work on reading the action. We need to do better than how the last matches went, the many goals conceded are an objective fact “.

“Suffering Tounkara like Gondo or Odogwu? Tounkara attacks depth well and is good at aerial play. We have improved compared to the first matches, both the match against Ascoli and against Sudtirol. We know that the Cittadella seeks depth and we have worked to shorten it: we have therefore carried out a study both against Tounkara and against the game of the opponents ”.

“Saric like Luperini? He can play that role. We have worked on it and in the future, it can become a solution ”.

“The work is continuous, I want to see improvements. Brunori played a good match against Pisa, both for assists and for chances: it is important that he is dangerous and that he goes into the box. Vido entered and went close to the header: we have a lot of resources. Having scored three goals was important ”.

13.11 – “Gomes and Stulac have often worked together in training: they can also coexist in a two-half median because Claudio is good at reading opponents”.

“The specific weight of the match against Pisa was important, and there was an important reaction: even after the 3-3 we were not afraid and we tried to win. They were important signals, but tomorrow we have to bring home the full result ”.

“Today we have an excellent athletic condition: the only one outside is Sala. The problems that have occurred during the week have been reported only in order not to put too much effort on the players ”.

“Manage the advantage with Pisa? We have always tried to play football, so maybe we didn’t think about sweeping or closing down when we were ahead. When you have the ball you have to play to score a goal, you can’t speculate on the result ”.

On the new ones who have not been affected: “The team is in front of personal interests, each of my players’ train and stimulate him. I do this with everyone, then I have to make technical choices, but I don’t forget anyone. Maybe I see players who are more ready from a psychophysical point of view. It is then up to them to respond ”.

Not called up for technical choice: Crivello, Doda, Peretti, Pierozzi