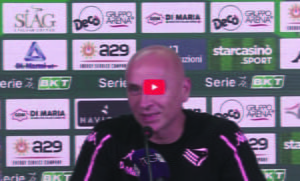 Palermo – Genoa 5th Day Serie B: The Palermo coach, Eugenio Corini, presents the big match against Genoa which will be played on Friday 9 September at 8.45 pm.

On the course: “We always have official matches, it’s not like in retreat. We have checks that count points. The post-defeat emotional state is difficult to digest, so any training situation is part of the growth path. I want to see improvements every game so that the path we have started gives the results I want ”.

On players who have less space: “Twenty outfield players, it is obvious that you can have young players who may play less. But I will train them in the same way as I do with others. Then football is strange, maybe the hierarchies change. In the final part of the week, however, I prefer those who will be called up “.

On Genoa: “Every match is essential and prepares for the best. Genoa is very strong, the most accredited together with Cagliari and Parma to go up. I want a temperamental and emotional reaction after what happened in Reggio, we prepared it as we would have done against any opponent. You must have emotional control, otherwise, the tactical phase is worth little “.

“We cannot expect to have everything immediately: it will be a medium-long path. There are many things we have to do and at the same time put strong performances on the field ”.

“In Reggio we had 9 new players, who are many and they had traveled different paths. The goal is to do as best as possible up to Frosinone, then take advantage of the break to consolidate mutual knowledge, both human and tactical. Of Reggio I would burn the first twenty minutes because the team did not know how to read the opponent. In the second half, we did better: we consolidated our possession and attacked more, even with better defensive control. Then if you take a goal from a lineout it becomes difficult. If we had controlled those situations, it would have been different ”.

“With Genoa I want to see a team capable of suffering, all together. They create a lot of central density, with the winger almost attacking midfielders. We must press well with the midfielders and prepare to work well on the counterattack to hurt them. We also prepared it from a character point of view: I expect a reaction “.

On Gomes: “He has a great football culture, grew up in PSG and then in Manchester City. Last year he had an important experience. He is very intelligent, I understand that from the questions he asks. He has value and he can give us a hand during this season ”.

On the criticisms after the two knockouts: “It is physiological that there are difficulties, but I understand the fans: because the first to feel bad is me. We have a lot of work to do, but we must not lose sight of the starting point. I didn’t see only positive things in the first hard ones and I don’t see only negative things now ”.

“I have already decided on the formation. I don’t want to change much: consolidate the attitude. In defense, given the expulsion of Bettella, Marconi will play “.

On expulsions: “Marconi’s was well spent because the attacker was alone in front of the goalkeeper. The other two, you have to keep an emotional check ”.

On the goal: “Massolo had contributed to a fantastic promotion, and we integrated the goal with Mirko. But I consider them two owners: however, there must be serenity for those who save. Now I want to consolidate Pigliacelli, who in my opinion is blocking well ”.

Brunori-Coda challenge: “Matteo has a consolidated attitude: he always approaches in a very intense way, which also leads the rest of the team in the wake. Now he too has become a captain: the responsibilities grow. Massimo is a great quality forward. I hope Matteo wins the match with Coda ”.