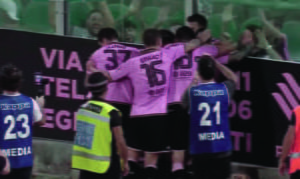 The teams make their entry into the field, Palermo plays with the classic home suit in the pink jersey and black shorts, entirely white for the host team. The kick-off is entrusted to Corini’s squad who, in this first half, attack from right to left.

The hosts, pushed by an immediately warm audience, start with a thousand and after 40 seconds they get the first free kick with Elia who landed irregularly. The former Empoli Stulac took charge of the punishment and tried to surprise Martinez, but hit the outside of the net.

At 3 ‘of play, the guests make their wrists tremble. Action maneuvered from the rear, long throw for Coda who plays on the bank for the rushing Ekuban, launched face to face with the goalkeeper rosanero, opens the platter too much with the ball ending a few centimeters from the post.

Another dangerous maneuver by Palermo in the 10 ‘on the left out. Stulac manages to conquer the ball and serve Di Mariano positioned wide, the former Lecce and Venice close the triangle with Stulac who, however, makes the ball slide too much and starts a weak right that does not worry the extreme defender of the Ligurians.

At 20 ‘Palermo is still dangerous and does so with Segre, the former Torino is good at picking up an incorrect rejection by the host rearguard, but at the moment of the shot, he is not very precise and shoots high.

Minute 23 ′ a very dangerous action by Corini’s men. Brunori fights on the right out with Mani, jumps the direct opponent, and crosses in the center for Di Mariano who with a right at half height does not hit the goal, with the stadium ready to cheer.

At 33 ‘the bomber Matteo Brunori is very dangerous. The rosanero captain receives assistance from Segre who needs a ball in the center of the area, the attacker protects the ball and turns to his right kicking towards the goal defended by Martinez who, however, opposes and tells him no.

There will be 2 minutes of recovery. At the first of these two minutes comes a great save by Pigliacelli. Portanova is lucky in two rebounds, the ball arrives than is discharged for Jagiello who kicks with his right foot and the goalkeeper is good at relaxing and deflecting.

At the end of the first portion of the game, the result says 0-0.

The second part of the race begins with the same twenty-two, without any change for each side. The strong departure of the hosts who at 48 ‘complain about a penalty kick which, however, is not there for Mr. Cosso even after the consultation with the Var and he is actually right.

PALERMO IN GOAL at 49 ‘. Di Mariano escapes on the left wing, Bani deflects the ball and involuntarily serves the rosanero captain who ends with the left by beating Martinez and blowing up the more than 23,000 Barbera.

Blessin immediately tries to shock him and uses a double change. On the pitch go Aramu and Yalcin for Jagiello and Portanova. At 60 ‘change also at home Palermo, Corini removes Saric from the challenge by putting Damiani in his place.

Rescue of Brunori who turns into a defender. The rosanero striker intervenes from the chest after Yalcin’s header and saves from the equalizer, but the ball remains there, Bani does not throw it in because Pigliacelli stops him.

Minute 73 ‘dangerous guests with Coda that makes Pigliacelli tremble. Action on the right out, ball unloaded for Coda who turns into a handkerchief and starts a right from close range, the far defender is reactive and I send for a corner. Now Genoa charges with their heads down and tries to exploit the mistakes of the squads. One of these tries to take advantage of it Guven, who takes advantage of a short push from Buttaro and from the edge of the area kicks with his right foot but the ball does not take the right turn.

Genoa is again the protagonist in the 77th minute, nice pocketed by Coda for Ekuban who tries the dig but sends high. Blessin, however, looks for them all to seek a draw and sends Puscas to the field for Hefti and they go to 3-4-3. Corini, on the other hand, for the last 7 minutes of play, plus recovery, sends in Soleri and the newcomer Gomes and for Di Mariano and Stulac.

Clamorous opportunity for Palermo at 85 minutes. Soleri, with his head, serves Brunori who only has to kick on goal and does so but hits Martinez who, somehow, sends for a corner. Elijah at 88 ‘steals the ball and still has the strength to sprint on the wing, the winger tries to pass the clock but the ball is stolen.

For the final minutes, Corini is missing Sala for the injured Mateju and Brunori, who comes out to thunderous applause, for Vido. There will be 6 minutes of recovery before the final triple whistle. Shiver down the back of all the Barbera 93 fans, Genoa finds the way to the goal but everything is stopped for an offside.

Palermo returns to victory thanks to the goal signed by Brunori.