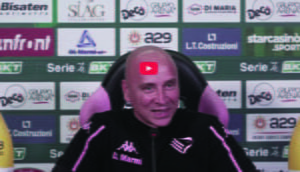 Palermo Venezia 26/11/2022: Palermo is back on the pitch: Eugenio Corini presents the important match against Venice at the press conference, which the squad will play at Barbera on Sunday 27 November at 6pm.

Compared to the last stop, we worked harder getting to know each other better. Against Sudtirol we deserved a different result, now we know each other better, some players have grown up and have a different tactical awareness. Unfortunately we have spent these two weeks with the disappointment of Cosenza, we have to transform it into energy against Venice which is a very strong team but in difficulty.

Coach change in Venice? With Vanoli they played against Reggina both with 4-3-3 and with 3-5-2, they deserved the double advantage in the first half, then the Calabrians won in the second half. But Venice remains a technical and physical team that fails to achieve results. Their internationals did not play their second friendly to better prepare for this match. We have no information apart from the Fiordilino interview.

Our attention is directed only to this match. Stulac is fine, he worked with great intensity. It is always a valid option, but Claudio Gomes is doing well at the moment, there is great competition in that role.

Sala worked well, in Cosenza I thought about putting him in, but he didn’t have the right outfit. The match will probably start tomorrow to see how he holds up and if he can last the 90 minutes. Many recovery minutes in Qatar? It seems to me a provocation that turns towards the need for effective time.

There was a great disappointment in Cosenza, with just a few shots conceded we conceded 3 goals, the perception from the pitch was positive. Venezia is very dangerous, we are ready to put our qualities into play by making fewer and fewer mistakes.

You know the goal, it is very clear: to consolidate the category. I expect a further phase of improvement, with the awareness that this is a very balanced championship. The boundaries and balances are really thin. The most famous teams are having some difficulties, there are strong teams in the lead but not expected in those positions.

250 career benches? It’s a good goal, I’ve never paid much attention to numbers, not even to appearances as a player.

Lack of attention in Cosenza? I can’t say, these are wrong readings, but the attention has always been maximum. I didn’t see the superficiality, it would have pissed me off a lot.

They’re all important matches, other direct clashes? We don’t think about others, but about what we do. Only after that do we go and see the results of the competitors.

More strikers? We play with Di Mariano, Brunori and Valente. You often ask me why we concede three goals, a team must always find a balance in respecting our qualities and those of the other teams.

Goals from the midfielders? We have a good presence and density inside the opposing area. We are working with Broh and Segre, sometimes even shooting from the edge could be an option to score goals. Mateju is an important player, first I asked him to sacrifice playing on the left, but on the right it is his natural position also for attacking.

Bettella will play in Marconi’s place. Buttaro didn’t recover from the sprained foot, he seemed to be better after Modena. He is making a journey, I find it hard to say when he will be able to return. Saric has had a grievance about an old injury he had last year. He will certainly be absent even with Benevento and Como.

Zamparini has given so much to Palermo, he has taken it to unimaginable levels. He reached Europe, played in the Italian Cup final. Surely the final part was painful for everyone, but it doesn’t erase what was done.

Won a few tackles? We are working on it more intensely to make our kids understand that this is an important feature. Soleri? He’s a striker, he could play the role currently occupied by Di Mariano.