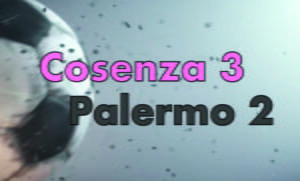 Cosenza Palermo 12/11/2022: After two consecutive successes, Palermo returns to the field, at the San Vito-Gigi Marulla stadium, to challenge Cosenza in the match valid for the thirteenth day of the Serie B championship.

Kick-off scheduled for 14:00. The teams make their entry into the field with Palermo in classic home outfit with pink jersey and black shorts, red and blue jersey and white shorts instead for the hosts. First ball of the match entrusted to Corini’s men who, in this first half, will attack from left to right. Referee Gualtieri whistles the start of hostilities: Cosenza-Palermo begins.

The match begins and Cosenza immediately tries to push, a good opportunity in fact after only two minutes with Calò who tries to cross from the right into the area, but the ball ends up on D’Urso in the area coming out on the bottom. Palermo responds immediately, a minute later, with Di Mariano’s cross in the area for Brunori who coordinates for the shot on the fly but hits badly sending the ball out.

Lively game in these first minutes, with chances on both sides especially for the dangerous Cosenza, at 9 ‘, with the conclusion from the edge of Florenzi hitting the outside of the net giving the illusion of a goal. The first yellow of the match, at 11 ‘, for Mateju for a dangerous game followed, at sixteen minutes, for Devetak for stopping a dangerous restart by the hosts in a foul way. The first twenty minutes of the match were certainly enjoyable, the result of the offensive attitude of both teams, with Palermo particularly active, especially with Di Mariano on the left-hand side.

At 21 ‘Cosenza dangerous with a free kick kicked by Calò from the right, the ball crosses the entire penalty area but no one manages to deflect it towards Pigliacelli’s goal, ending up on the bottom. Palermo responds a minute later with a poisonous cross from Di Mariano in the area, but Meroni takes care of intervening on the ball by sending it to the corner. Immediately a change for Palermo in the twenty-nine minute, in Crivello for Devetak not at the best on a physical level and already close to the second yellow.

Double opportunity for the very close Cosenza, between 38 and 40 ‘, at the end from the small area towards Pigliacelli but first Broh and then Segre save their goal. At 42 ‘Palermo goal! Splendid action of the squads, all first with Gomes who throws on the trocar for Di Mariano, volley service in the area of ​​the number ten rosanero towards Brunori who overcomes the defense and hits first, piercing Marson for the advantage of Corini’s men. Advantage that lasts a few minutes because, in full recovery in the first half, Cosenza finds the equalizer: Rispoli’s cross from the right into the area, Florenzi all alone coordinates and hits on the fly, overtaking Pigliacelli for the goal that restores parity.

The first part of the race ends with the result of 1-1.

The two teams return to the field to start the second half, no change at half-time, with Palermo who have already made the first Crivello-Devetak substitution at 29 ‘. The recovery begins at the San Vito-Gigi Marulla stadium between Cosenza and Palermo. At 48 ′ first yellow of the match also for Cosenza, Martino warned for having stopped Segre’s restart in the rosanero half field. Only a minute passes and another card is imposed, this time on Florenzi, a foul from the edge of the home team’s area on Brunori who is worth the warning for the author of the equal goal.

In this phase of the match, the yellows flounder and Marconi also ends up in the list of bad guys for dangerous play on Merola, a heavy yellow because the rosanero defender was warned and will have to skip the next match. The first conclusion of this second half, in the 54th minute, is by Calò who advances from the trocar and when he reaches the edge of the area he tries the shot but finds Pigliacelli’s safe save.

At 56 ′ goal from Cosenza: Voca misses the conclusion on the fly from outside the area, the shot becomes an involuntary assist for Rigione who, face to face alone in front of Pigliacelli, does not miss the goal of the hosts’ advantage. The overtaking of Cosenza lasts only two minutes because Palermo immediately finds the equal goal! Corner kicked by Valente, Nedelcearu’s header for Brunori who finds the winning gore on which Marson can do nothing. At 60 ‘Calò warned for dangerous play on Valente. At 62 ′ again Cosenza’s goal, what a match at San Vito-Gigi Marulla!

The hosts are again ahead with Larrivey who, on a cross from D’Urso, dominates Crivello and headers for Cosenza’s 3-2. First change for the hosts, with Brescianini taking the place of D’Urso. At 69 ′ an opportunity for Palermo with Segre who, in the area from the right, defends the ball well and ends in goal finding the good response from Marson. In the seventy-minute double change for the pinks: out of Marconi and Segre, in Vido and Saric.

At 76 ‘triple substitution between the ranks of Cosenza with Venturi, Brignola and Camigliano who take the place of Calò, Merola and Rispoli. In the eighty-minute Palermo, looking for the same, shows up in the attacking phase with a conclusion from the edge of Di Mariano easy prey for Marson. At 81 ′ Palermo completes the substitutions with Floriano and Damiani who make their entry into the field for Gomes and Broh. Even Cosenza, in eighty-four minutes, completes the changes: Florenzi outside, Kornvig inside. At 88 ‘penalty kick for Palermo!

Rigione’s hand touch in the area after a header from Vido, after a long check from the VAR, the referee Gualtieri assigns the penalty and warns the Cosenza defender. Brunori shows up on the spot, but Marson saves the penalty kick! The squads miss the same opportunity, no hat-trick for the rosanero striker. The pink, after the wrong penalty from Brunori, pushes in search of the equal and goes to the shot with Saric, still finding the opposition of Marson.

At the end of six minutes of recovery, referee Gualtieri whistles the end of a crazy match: Palermo falls at the San Vito-Gigi Marulla stadium at the hands of Cosenza.