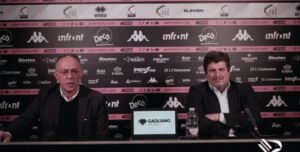 The presentation of Silvio Baldini the new coach of Palermo FC, by Castagnini.

Silvio Baldini introduces himself to the rosanero fans for the second time. The new Palermo coach speaks at the press conference together with sporting director Renzo Castagnini about the beginning of his new adventure.

TEXT / The press conference for the presentation of Silvio Baldini, the new Palermo coach.

Castagnini: “I thank Filippi and his staff, whom I feel only to thank. I don’t think he has to spend many words to introduce Baldini, his CV speaks for itself”.

Baldini: “What prompted me to come to Palermo? The fascination for Sicily, from which I have never strayed. Destiny gave me this new chance after 18 years, now it’s up to me. I am not afraid to face this difficulty. Palermo has good potential, the problem is to understand why this potential has not been expressed especially away from home. We need unity, the players will have breakfast and lunch together if everyone goes well Palermo will win many games, if someone does not go well they will step aside”.

Castagnini: “I spoke to Baldini about the transfer market, he still has to evaluate the team well, but we already know where to intervene. We have to be careful, first we do things, then we say them”.

Baldini: “Inside my heart, I always thought I could have another chance with Palermo. Inside of me, I have a great desire to work. Palermo is a difficult city, I know that when the results don’t come, everyone goes to the grill, but this is my job”.

Baldini: “We negotiated very quickly with Castagnini and Sagramola. I asked for a decent fee for me and my collaborators. Money remains the devil”.

Baldini: “I’ll try to give the team an identity, I want an aggressive team, which never goes backward but always attacks forward”.

Baldini: “Valente has always played outside. In Carrara he played high with me, now he will play based not only on his characteristics but also on those of the others”.

Castagnini: “The numbers say that we are a competitive team. At home we are among the first, we did badly away. Many players have made less than expected. I don’t know if we are better or worse than Bari, but we certainly didn’t lose against any of the big teams, and it’s not trivial. Then there are also the episodes, which have always gone against us. Installations? We will train at Tommaso Natale”.

Baldini: “I’m here to help the team, not to put it in difficulty. I have to understand what he needs, the players have to adapt to me and I to them”.

Castagnini: “Change coach? We didn’t think of it before Latina, up until 5 Sundays ago the team had done certain things, in the last 5 games they played others. When things don’t go well you can’t change 24 players, often the coach pays. Baldini told me on the phone that he would only be back on the bench for Palermo”.

Baldini: “I only received Christmas greetings from Valente, we haven’t spoken to each other yet”.

Castagnini: “I contacted Baldini even before Boscaglia, but he had given the floor to Carrarese. Now I have managed to bring him here”.

Baldini: “Talking now about what Palermo was like is not a nice thing. It is not correct to speak of the team that I have seen so far. I need to look the players in the eye. If you want to enter a person’s heart, you must first enter the head. Technically it is not a bracket, on the contrary”.

Castagnini: “Baldini is a complete coach, a football teacher. I have witnessed this for years, his teams have always played well. In society we think that Baldini has all the right characteristics to coach Palermo, he has the right flame”.

Baldini: “The important thing is that the players understand is that training in a certain way and having certain ideas will bring benefits. I am very convinced that we will have some positive surprises, Palermo has a competitive squad”.

Castagnini: “Somma has always been available. At the beginning of the year, it was out and we were unable to sell it, now it remains at the discretion of the coach”.

Baldini: “How have I changed in these 18 years? It seems to me to always be the same. In my head I am young, physically the years weigh”.

Castagnini: “We do not do contract renewals. Making a contract is a serious matter, at the moment I don’t know if there is someone who deserves it. If we lose patience players, I don’t see the urgency. Market? It is still too early to say the department in which we have to intervene”.

Baldini: “Talking about who was there before is difficult for me. The only thing to do with Palermo from before is to take the things I need to improve. I have to try to bring enthusiasm, to do something different. To make the players understand that the game of football is something beautiful. The fans have to be involved, the team belongs to the city”.

Baldini: “I also brought a mental coach, Nicola Colonnata, to the stand. He will have to give us a hand in making the players understand that everything depends on their mental strength. This discrepancy between playing outside and inside made me think that someone like Colonnata serves”.

Baldini: “There are no impossible things. The matches are dry, anything can happen. Silipo? He has great talent, but he needs to be helped, understood, and supported. He doesn’t just go mortified when he makes a mistake. If he feels the support he will certainly do well”.

VIDEO / The presentation of Silvio Baldini the new coach of Palermo FC, by Castagnini.