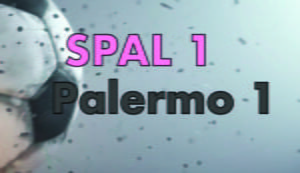 SPAL Palermo 11/12/2022: New direct clash in terms of salvation for the rosanero, coming from two consecutive useful results and who want to close this mini tour de force of three matches in one week in the best way.

The teams enter the pitch, hosts wearing blue-and-white jerseys and white shorts, while the pinks play in their black away kit. Kick-off entrusted to the hosts who, in this first half, will attack from right to left. Referee Di Bella whistles the start of hostilities: SPAL Palermo begins.

After just four minutes, Nedelcearu was booked for the first yellow card of the match for dangerous play on Rabbi. A minute later Palermo showed up with Di Mariano who, once he entered the area, finished from a tight angle on the near post finding Alfonso’s answer that deflected for a corner.

On the resulting corner, Bettella hits the head well but just doesn’t find the intersection of the posts, with the ball going off on the bottom.

At minute nine SPAL took the lead: Meccariello, directly from a corner taken by Esposito, volleyed past the entire defense and stabbed Pigliacelli for the goal that opened the scoring in favor of the hosts.

After the goal from behind, Palermo tried to react but suffered from very intense pressure from SPAL, very active especially in their left-handed lane manned by Valente and Bettella both in difficulty.

In the 22nd minute action by the hosts with Rabbi holding the ball in the area and unloading on La Mantia, a shot by the SPAL attacker who finds a deflection and the ball ends up in a corner kick.

In the 26th minute the blue-and-whites were also booked for the first time, a yellow card for Peda for dangerous play on Di Mariano.

At minute twenty-nine Palermo also tries to show itself with Valente who, served by Segre, puts a nice ball in the middle of the opponent’s penalty area for Brunori who just fails to impact the ball in a slide.

The pinks again, a minute later, become dangerous with Segre serving Di Mariano from the edge of the area, but the conclusion of the Palermo wing goes out widely on the back.

In the 32nd minute draw for Palermo! Always and only Matteo Brunori! The Italian-Brazilian forward is served in the area by Di Mariano, stops and ends with a low shot from the billiard ball that touches the post and ends up in the net behind Alfonso.

Parity has been restored at the “Mazza” in Ferrara, with the squad dragged once again by the goals of his striker. In the 38th minute another yellow card was awarded, this time, to Esposito for a bad intervention on Di Mariano on the restart.

Spirits flare up between the two teams on the pitch, with the referee forced to intervene by sanctioning Brunori too for protests with another yellow card.

A positive moment for the pinks who, galvanized by the equal goal, are closing the first half on a crescendo after a more staid first part of the match. In the 42nd minute, Di Mariano was booked for the third yellow card for Palermo by the referee for dangerous play.

In this phase of the match, yellow cards are pouring in and even Rabbi from SPAL ends up in the referee’s notebook of villains, who is also sanctioned for dangerous play.

After a minute of added time, the first half of the match ends with SPAL and Palermo standing still on the score of 1-1.

The teams return to the field to resume the match. Double change in the ranks of SPAL: goalkeeper Alfonso stops due to injury, replaced by his second Thiam, Fiordaliso is also on the field in place of Peda.

Palermo kicks the first ball of this second half: the match at the “Paolo Mazza” stadium in Ferrara starts again.

In the 48th minute SPAL was immediately very close to scoring the opening goal with La Mantia who managed to slide into Dickmann’s cross in the area but was unable to find the target by sending the ball high.

In the 56th minute, a dangerous free-kick by Stulac from the edge of the area, with the ball flying up and deflected off the barrier and just brushed the post to Thiam’s left.

A minute later, a very dangerous SPAL counter-attack with Rabbi who finds himself in the area face to face with Pigliacelli but the Rosanero goalkeeper hypnotizes the attacker by rejecting the ball, the ball reaches Dickmann who misses the target from a good position.

In the 62nd minute, Segre also ends up in referee Di Bello’s bad guys’ notebook, yellow for him for dangerous play on Meccariello. First changes, in the 64th minute, for Palermo with Broh and Vido taking the place of Stulac and Di Mariano.

In the 66th minute Valente crosses into the area for Brunori’s head who manages to impact towards the goal, but the ball is central and Thiam blocks it without problems.

In the 70th minute, double substitution for SPAL: out of Murgia and La Mantia, in for Zanellato and the former squad Rauti.

New substitution for the squad, the third so far, in the 75th minute with Saric taking over for Segre. Rather slow pace in this phase of the match, with both teams probably a little out of oxygen after the efforts of an intense week with three games in seven days.

In the eighty-one minute, SPAL showed up with a dangerous shot by Celia from the edge of the area, on which Pigliacelli intervened with an excellent reflex.

In the meantime, the last change for SPAL: Rabbi out, Finotto in. In the 84th minute, Captain Brunori went out for Palermo to leave room for Soleri.

The landlords are slightly better in this final phase of the match, more proactive and with a greater offensive drive than the squads, but the pace still remains extremely low.

After three minutes of added time, the match between the “Paolo Mazza” of Ferrara between SPAL and Palermo ends with the result of 1-1.