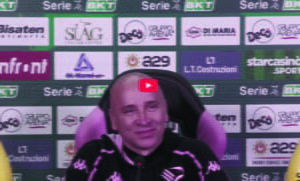 Palermo Cagliari 17/12/2022: Corini intervenes in the press conference to present the meeting with Cagliari, talking about Liverani, the conditions of the injured players, also ranging on the transfer market, where the coach has clear ideas.

I wanted to address a thought to Sinisa Mihajlovic, a great player and a great coach who has shown a lot in these three and a half years. I extend my closeness to the family.

We met Liverani many times on the pitch and we both played for Palermo at different times, when we played we were the best years in the history of the rosanero. I have faced him many times also as a coach, we won a championship together the year in which I coached in Brescia and he in Lecce.

We are very happy for Brunori. It is a great satisfaction for the club and for the fans, it means that after a few years Palermo is making a comeback. This is a small beginning, hoping that Palermo will build another equally important story. Matteo deserves it, he has scored many goals.

Cagliari’s aim to win having just been relegated, but football is complicated. I know what it’s like to coach a team that has to win.

They won against Perugia, however, demonstrating some difficulties overcome with the value of the individuals. The match will be difficult and complicated, but we have prepared ourselves to face it in the best possible way.

Since the match against Pisa, the team has grown in awareness, despite the defeats against Cosenza and Venice. The team knows each other better, the attempt is to recover players who for many reasons have not performed as we expected.

Stulac played a good 65 minutes against Spal, I expect a lot from him, he will start the match against Cagliari, I want to give him continuity. Saric has been slowed down by the injury, he has to work, we are waiting for him, over time he will be able to show his qualities.

After Terni, I understood that what I had in mind needed a medium-long journey, but the championship doesn’t wait.

We have been reactive in changing and finding stability, even in defeats there has been continuity of performance. The team knows how to handle difficulties and ride the wave when they are doing well, I see constant growth.

Now I have direct knowledge of all my players. Market? I’m not talking about the number of players who need to arrive, but about the quality they need to play for Palermo.

Cagliari is a strong team, we are fully aware of their value. We have the resources to beat Cagliari, and we will put them on the field. Nedelcearu was moving, it wasn’t easy, but there we found the energy together. We thank him again for what he has done for us.

Recovering the result is something important (against Spal for the first time this season, ed). Now we are waiting for a complete comeback, it is part of the process to ensure that Palermo becomes stronger and stronger.

Bettella is at risk due to muscle fatigue, we reserve the right to evaluate it today. Buttaro will not be available in these two games. Outbound market? I always want my players to be happy, my advice to the club is that I want a smaller squad, even during training it’s not easy. I’ll be very direct with them.

Bad at home? You have to be able to handle certain pressures. It’s our responsibility to ensure that the stadium pushes us to the end, something I saw against Como.

We’re growing, we’ve played games under stress with unhappy fans, playing here is complicated, if you know how to play here, you can play everywhere.

Zero goals from the bench? An objective fact but also due to bad luck, Vido’s post comes to mind.