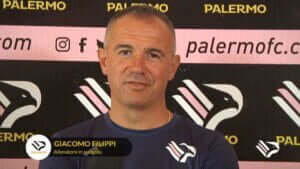 Filippi confirmed: now the next year’s team,
the coach will lead the rosanero for the next season!

Filippi confirmed also for the next season below the pronouncement:

Palermo has decided to continue with Filippi on the bench. The decision was made after the meeting between the coach and President Mirri in the Barbera offices.

The coach, already after the elimination from the playoffs, had indicated that he was ready to remain without any problems. The president did the same at the press conference last week, pointing out that they were going to have an interview and they did.

Filippi for next season will lead the team that will try to win promotion to Serie B, but which will be different from the one that ended this championship. The coach from Partinico would like at least five new players to join the team, resulting in the exits of players who are no longer congenial to the project.

The budget, however, will not be unlimited. Mirri pointed out that the available figures will be around 5 million, but it is hoped to reach the one available last year. In this case, however, it will be necessary to operate on the transfer market with some transfers such as that of Lucca which are of interest to clubs of higher categories, which could be followed by teammates with a high salary and that the company would prefer to sell.

Market not only for Lucca, the recently retired Reggiana who has just made Aimo official Diana on the bench would be interested in Ivan Marconi, defender expiring in June 2022. Saraniti instead has a contract until 2022 but his position is in doubt and he too could be leaving. We are also moving towards the confirmation of managers such as Castagnini. Staff is also working to identify the next location for the retreat which will probably be in Calabria. The new Palermo begins to move.

On the way out, in addition to Martin who will not see his contract renewed, it seems there is Crivello who has not found space with Filippi. To follow him could be Saraniti who has various requests, but his will is to stay in the rosanero to play his cards. The different players with the contract expiring in 2022 could also say goodbye who, again as stated by Mirri at the conference, is not a priority for the club.

From the sale of the “big” to the cutting of the most expensive salaries, and then greater prudence in cost management and certainly a “spending review” market. The Palermo of next season – unless the sudden arrival of new members – will have the main objective of containing costs.

The fifteen million euros of share capital committed by the Mirri family and Di Piazza initially should have been used to prepare the three seasons, but they were also used to cover the management losses of the first two years of the new club’s life. And here is that for next season there would be only six million euros as a budget.

In a few days, Di Piazza will officially be an ex and Mirri will have to consider what to do: whether to take over the 40% left by the Italian-American himself, bring in other members who would take the part of Di Piazza or sell the club directly. Mirri is more likely to take over the entire package, considering that at the moment investing in the world of football and mostly in Serie C is certainly a gamble. Making a virtue out of necessity, this seems to be the motto that will accompany Palermo and Mirri in the coming months.