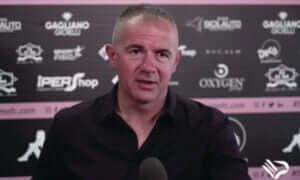 Full press conference by Coach Filippi and the DS Castagnini

Giacomo Filippi will also be the Palermo coach next season.
Here the his first to comment on the press conference :

The renewal of the technician is official, confirmed through a note issued by the rosanero company through its reference channels. Filippi, who took over from Boscaglia during the current season, took over the reins of the team after the exoneration of the Gelese coach and led Palermo to the playoffs. Renzo Castagnini has also been confirmed in the role of sporting director. Below, the statements of the Palermo coach.

“We have to complete the staff trying to be numerically competitive in all departments. We will complete the mosaic with two elements per role. Then this choice will be made in the best way so as not to have unwelcome surprises over the years. We will be good and meticulous. in the choice of these elements. We have to find solutions that can improve our working methodology. We need to monitor the working sessions and the group a lot.

The work of the staff is complex but we really want to do well and we will try to find everything that can bring benefits to the team. The key points of the team are the players who are under contract and who have given a solid base to this Palermo in the final part of the championship: Accardi, Valente, Luperini, Silipo, Pelagotti, Lancini, Doda, etc. Up this solid base that makes up 3/4 of the staff, we can work and carry on. The squad will be completed and the director already knows what to do. divided objectives and program which will be composed of work, sacrifice, and suffering “.

The sporting director of Palermo Renzo Castagnini has made important statements in view of the near future of the rosanero franchise.

Giacomo Filippi will also be the Palermo coach next season.
The press conference continues…

Renzo Castagnini has also been confirmed in the role of sporting director. Here are the words of the latter, who spoke on several important issues concerning the summer programming in view of the next rosanero vintage.

“I have the confidence of the director and the president. In such a large company there are many things to do and I will therefore be responsible not only for the technical aspect. In a company, we must all work together. I believe that in this respect there are no problems. Lucca? The important player who is liked by many clubs but is still with us and I can’t add anything else. Santana? We haven’t talked to Mario yet, we will all do it together. Santana deserves the attention she deserves for what she was and for the Business?

Our market hasn’t started yet because there are still teams playing. I talked to Lucca before he left. He found himself very well in Palermo but I believe that the ambitions of all young boys are those to grow up doing his career. If he has the opportunity to leave, he will ask us. Then we have to see if there are the conditions to do so. In Palermo it was very well and it is certain that we would like to keep him but the ambitions they have their own weight. “

An official passage with a lot of pathos for Tony Di Piazza who has occupied a seat in Palermo. From today the rosanero change their corporate structure with the exit from the ranks of the minority shareholder of the Viale del Fante club. Di Piazza now becomes a creditor of the club for having exercised the right of withdrawal from Hera Hora, the association that owns the Palermo which for the moment sees the Mirri family inside. President Dario will now have to liquidate Di Piazza who owns 40% of the rosanero club.

The American from San Giuseppe Jato dedicated a Facebook post to the pink fans on the occasion of the end of the relationship: “A heartfelt thanks to all the Palermo fans for their affection for me. Force Palermo always “.

PreviousFilippi confirmed for the 2nd time: now a good team for the next year!NextAwesome Palermo Calcio fans Euro 2020
Back to top