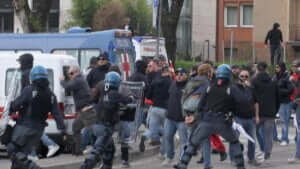 Palermo 13th October 2020:
In the investigation coordinated by the DDA on the Borgo Vecchio family, relations between the Palermo football supporters and Cosa Nostra emerged. The company is not involved.

In Palermo, the leaders of the Borgo Vecchio mafia family wanted to control the contrasts between ultra groups to avoid clashes inside the stadium, on the one hand harmful to the development of the matches and on the other a source of possible difficulties for a historic ultra rosanero boss, element of contact between the clan and the world of organized citizen supporters. This is what emerged from an investigation by the carabinieri, coordinated by the DDA, which today led to 20 arrests.

Palermo FC press:
In relation to the relations between members of organized crime and self-styled Palermo ultras, as emerged from the “Resilience” operation conducted by the Carabinieri on 13 October in Palermo, the Palermo F.C. harshly and incontrovertibly condemns any criminal conduct, even and even more so when connected to the Renzo Barbera Stadium and the activities of the rosanero team, assets that contribute to distinguishing the municipality and citizenship, bearers of sound values such as that of legality. For this reason, the Company has already given a mandate to its lawyers to evaluate the establishment of a civil party and any useful initiative in all appropriate fora.

PreviousThe Lega Pro is going to take an action against ElevenSportNextPalermo FC Calendar, new dates and times
Back to top