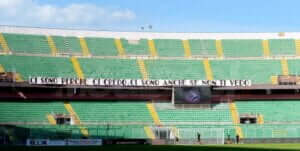 Palermo FC is it in crisis? They discuss Boscaglia’s choices and ticket prices.

A group of pink&black supporters waited for the return of the rosanero team from Bisceglie.
The players arrived at the Renzo Barbera stadium, with the club’s bus, around 10 pm.
About twenty fans were waiting for them who sought a rather peaceful confrontation with the Palermo players, demanding respect for the rosanero colors.

Seeing Palermo last in the table, in Serie C, is not good but it is a deleterious one on the state of mind of the fans.
The same as the game expressed by the men of Boscaglia. Men, not a team, because this Palermo still looks like everything except a team.
The consideration that, little by little, has started among the fans: not even Boscaglia is saved from the “trial” set up to find a “culprit” for the situation in which Palermo finds itself.

Boscaglia is of course not in question and it is not questionable, but the team must begin to show more than they have seen to date.
Regardless of the results, sticking to the playing field conditions, as the coach did yesterday, is a loophole that has not convinced anyone.