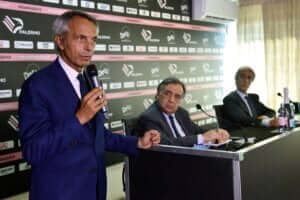 Sagramola: “We need more clarity on the rules on Covid-19”

Special moments in the Palermo home following the paradoxical situation following the disproportionate number of infections from Covid-19 (read here for info), the CEO of Palermo Rinaldo Sagramola wanted to express his disappointment during an interview granted to the “Gazzetta dello Sport“, regarding the rules considered “vague” regarding roses affected by Coronavirus.

Palermo Calcio is likely to play with half the spring team.

TuttoPalermo.net underlines: “For me, the players to consider should only by professionals and young people who have played at least one minute. The rule is vague, it must be interpreted and I hope it will be done with common sense. We need to know how to orient ourselves in the future. The confrontation with the leaders of the League is not acrimonious, we will adapt to the decision, but I expect it to be clarified. If we had known before that the Primavera were counted in this light, we would not have called them, decide a posteriori such an important detail, it doesn’t seem right. For me the Primavera is not part of the team group, they are called if necessary. In our case, because of the Under 17 boy found positive, among other things, the Primavera has also ended up in quarantine.”

PreviousAnother weekend without Palermo Calcio.NextThe new space at the Barbera Stadium...
Back to top