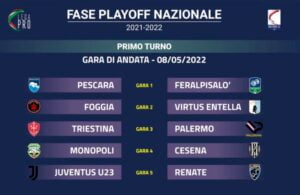 Serie C, the draw for the playoffs on the national stage

Extracted the five pairings for the first round of the national playoffs.
The third place in the groups plus the fourth in group A, Renate, took over thanks to the extra place earned with the Italian Cup in the category.
Virtus Entella was considered the fifth seed (with a return match at home) for the highest number of points scored in the season among the remaining teams.