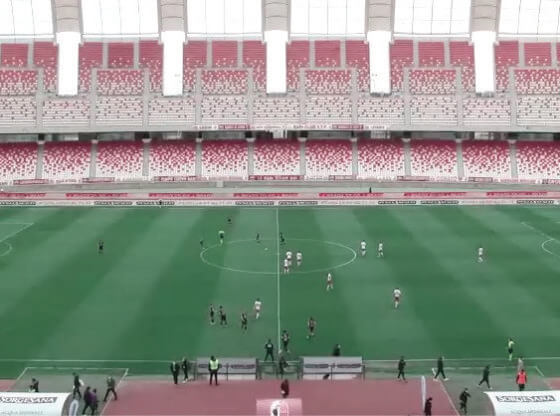 The first ball of the match is managed by the hosts, who will attack from left to right with the usual white shirt and red shorts; the rosanero, on the other hand, with the black suit will attack from the opposite side. Bari tries from outside the area. At 5 ′ De Risio kicks towards the goal defended by Pelagotti but sends out. 3 ′ later the guests have the first chance. Rauti headed first of all on Floriano’s cross, the Turin striker sent the ball towards the goal defended by Frattali who had to fly to send the ball over the crossbar.

Marras tries to break through on the left side, reaches the bottom, and tries a back pass for Rolando, but there is Luperini who is careful. At 11 ‘Antenuticci receives the ball, focuses, and kicks in a dangerous way towards the goal defended by Pelagotti, the goalkeeper has to dive to say no to the former Spal striker.

The “cockerels” try to spin the ball to sting Palermo which, however, remains behind the line of the ball so as not to be surprised. At minute 20 another corner kick for the men coached by coach Filippi, but this time the hosts did not let themselves be surprised and swept away.

At 27 ‘there is the first admonition of the match, it is Candellone who holds the shirt of Valente who was restarting. 30 ″ later De Rose tries it from outside the box, trying to surprise Frattali who has to stretch out, managing to send a corner. Penalty kick for Palermo at 30 ‘. Di Cesare lands from behind Kanoute who was launched towards the door defended by Fractals. The former Floriano shows up on the spot, displacing the red and white goalkeeper by sending the ball to his right. Rosanero then took the lead by 0-1.

The game stopped at 35 ‘for a foul against Pelagotti who, after the corner kick, intervenes on the ball and then hit by Rolando. The rosanero goalkeeper needs medical attention, but he recovers promptly. Bari tries to close the first portion of the game forward. Marras tries to wedge himself from the left, he has Accardi in front of him who has to resort to hard manners to stop him and is cautioned.

At 42 ‘another opportunity for the Sicilians. Floriano on the left edge of the area tries to concentrate and then serves Kanoute on the opposite side, the former Catanzaro kicks with the right, but is not very precise.

The first part of the game ends, after 1 ‘of recovery, on the result of 0-1 for Palermo thanks to the goal scored by Floriano, at 30 minutes, on a penalty kick.

Highlights Bari vs Palermo – The Photogallery

The race will resume with a change on each side. For Palermo in the Marong field for the yellow card Marconi, for the hosts out Ciofani and in Semenzato. At 48 ‘another change for Palermo. Floriano off the pitch to give Santana space. Very occasional for Bari at 51 ‘, looking for an equal. Marras enters the Palermo area, kicks with the left, and Pelagotti, with a great intervention, stops him. The rosanero are not there and are looking for the goal that could cut the legs of the cockerels. Valente reaches the bottom in the 53rd minute, crosses for Almici who, with his head, puts it back in the center for Rauti but the attacker commits a foul on Di Cesare.

At 55 ‘Palermo doubles with Santana. The Argentine from the left corner of the area starts a right aimed at the near post that seems to have no pretensions, Frattali is clearly late and the ball is collected. Carrera revolutionizes the whole attack to try to resume the game. In the 57th minute, the coach sent Cianci, Mercurio and D’Ursi respectively for Candellone, Rolando and Antennecci.

Despite the changes, Bari fails to make themselves dangerous, with Palermo in control of the match. At 66 ′ corner kick for the Pugliesi, with Marras kicking towards the center of the rosanero’s penalty area, but the first to arrive is Marong who lightens his head. Problems at home Palermo. Rauti stays down and needs medical attention. The class of 2000 does not make it and leaves the field to Saraniti.

At 75 ′ the cockerels with Mercury shorten. The attacker is the quickest to arrive on a loose ball in the area, kicks towards the posts defended by Pelagotti who is also deceived by a deviation. Palermo forced to end up with one less man. Almici has a problem in his right thigh and is unable to continue. Kanoute moves to the right out and will play the winger. Bari all forward in search of an equal goal. D’Ursi at 83 ‘tries his head calling into question Pelagotti who has to deflect it for a corner.

At 5 ‘from the end, all the Bari poured into the Palermo half. The action is a bit confusing and the guests manage to sweep, Saraniti tries to control the ball and goes down, but for the referee everything is regular. On the next cross, it is Accardi who is hit irregularly and there is a foul. Semenzato serves a cross in the center of the area at 87 minutes, where Accardi arrives and puts out. Palermo continues to defend itself. D’Ursi in the 88th minute requires a low cross for Marras who tries to arrive in a crash but is out of time.

Bari finds an equal goal in the 90 ‘. Perrotta finds the unexpected equal goal at the end of time. The cockerel player arrives first of all on a cross that comes from the right and from close range manages to bag the goal that allows his team to find a draw.

There is no more time. Between Bari and Palermo it ends with the result of 2-2
and the rosanero lost an important victory !