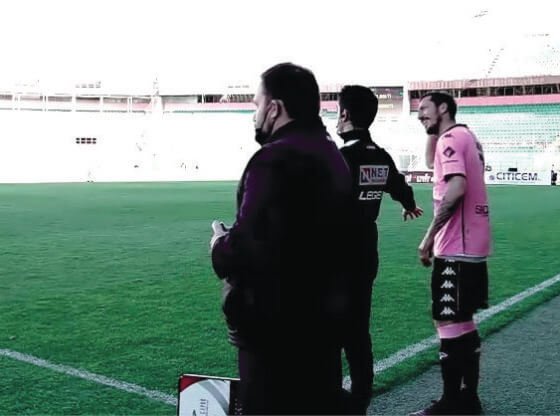 First ball of the match managed by the Pugliesi who will attack from left to right. After 25 seconds Palermo’s first shot with Floriano. The winger, captain today, focuses on the left and kicks with the right but the conclusion is wide. Bad entry by Peretti on Curcio, who is hit in the back and stays down. At 6 ‘throw from the rear of Marong for Kanoute, the winger hooks but commits a foul holding Galeotofiore.

Foggia closes well and starts again with Kalombo who at 9 ‘recovers the ball and tries to overtake Marconi in speed, but at the moment of the cross, he finds Peretti who sends for a corner. On the development of the same, Foggia with Vitale is dangerous; the Apulian number 3 forces Pelagotti to intervene by deflecting the ball remains inside the area and on which Dell’Agnello pounces, but at the moment of the shot he is disturbed by Rauti and sends a throw-in from the bottom.

First 15 minutes of play with Palermo doing better, but unable to break through the defense of the guests. Rosanero forward at 21 ‘, a ball that, after the deflection of Anelli, arrives at Valente who tries a shot but missed and favors Rauti who tries to head. The 2000 class arrives with the head and sends it out. At 23 ‘free-kick for Foggia, Peretti puts Dell’Agnello down a few meters outside his own penalty area; Curcio goes on the ball and kicks at the near post and forces Pelagotti to deviate for a corner.

Foggia trying to break through on the right out, Vitale in the 26th minute puts the ball in the center and Curcio arrives who kicks central but powerful, with Pelagotti who manages to repel. Palermo is dangerous at 38 ‘. Valente from a corner kick serves Marconi who hits from the heel, the ball is rebounded and Fumagalli must intervene to send for a corner.

The rosanero try to close the first part of the match forward. Luperini recovers a ball and widens for Floriano; the number 7 rosanero kicks with the right forcing Fumagalli to dive and deflect for a corner.

The first portion of the game ends without recovery and with the result of 0-0.

The challenge restarts without changes for both teams. The Sicilians go ahead with Kanoute who crosses for Luperini, the rosanero midfielder arrives on the ball but does not take strength. At 57 ‘long pass by De Rose for Rauti who challenges Gavazzi at speed, the rosanero striker reaches the edge of the area and is touched by the captain of the Pugliesi, with the referee showing him the yellow card. The free-kick is beaten by Floriano who serves Rauti placed at the edge of the area, the attacker makes a powerful but not very precise shot.

A quick restart of Foggia who tries to surprise Palermo, who closes well and starts again with De Rose who passes the halfway and serves Floriano, the winger at 57 ‘enters the area, overtakes two opponents and thinks too much before kicking when he does, he hits his opponents. Palermo claiming a penalty kick in the 72nd minute. Odjer arrives on the ball and enters the area, tries to jump Gavazzi, and ends up down. For the referee, everything is regular and we continue to play.

The game now seems more alive with the two teams than blinds the goal to bring home the three points. Palermo ahead in the 81st minute. Floriano takes two defenders behind him, reaches the limit, and unloads for Valente positioned on the opposite side, the former Carrarese focuses, kicks with the right, and brings his men forward.

5 ‘of recovery decreed by the referee. Foggia tries to push to at least try to score an equal goal, but it is the rosanero who become dangerous by winning a corner.

The rosanero return to victory within friendly walls, which had been missing for eight days. First internal victory of the Filippi management.