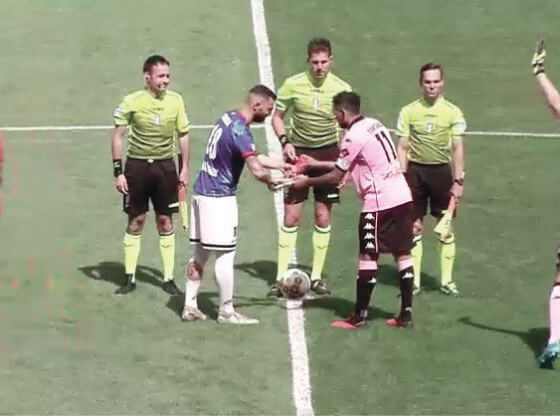 The first ball of the match is from the rosanero who will attack from left to right in these first 45 minutes of play. Long cross of Almici; the former Verona needs a ball in the center of the area, but the Calabrians know they are paying attention and close for a corner. Opportunity for the hosts at 3 ‘, Valente receives the discharge from Rauti and crosses for Luperini who heads wide. Vibonese trying to be seen in the Palermo half with a long ball for Spina stopped irregularly by Marong. Spina again at 9 ′ stopped irregularly. This time it is Palazzi who commits a foul after being skipped.

Study phase between the two teams, with the game being broken up by several fouls. Guests ahead at 19 ‘with a cross in the center for Paris, which hits a headache and favors the intervention of Pelagotti who blocks without problems. Valente duets with Santana on the left out, the former Carrarese receives the ball and serves a cross in the center that forces Marson to go out and deflect.

Statella at 24 ‘starts from his own half and runs across the pitch with the ball and chain, reaches the edge of the area, and kicks towards the goal defended by Pelagotti, with the ball deflected by Marong. The squads start again and earn a corner, with Marson staying down and in need of medical attention.

At 33 ′ Almici’s cross for Rauti’s head turns well, but the ball goes out on the bottom. Vibonese lives with Paris. The number 19, at minute 34 ‘, kicks with his right foot from outside the box but is not very precise. Spina’s play jumping Santana and ending up down earns a dangerous free-kick. Pugliese goes on the ball, his joke is to be forgotten. A quick restart of the guests with a long ball for Spina. The striker in the 40th minute has Marong in front of him who, despite the feints, remains standing and deflects the ball at the moment of the shot.

The first part of the game, after 1 ‘of recovery, ends with the result of 0-0. The match played at a low pace and without danger for both defenses.

Filippi decides to change by relying on Accardi for Palazzi. Change also for guests who have to give up Marson, due to a shoulder problem, and in his place inside Mengoni. Spina tries to create danger. The attacker tries to turn around in the area and kicks towards the goal defended by Pelagotti, who rejects with his foot. Minute 49, Valente serves a cross for Rauti who turns his head, with the ball that goes out at the bottom.

At 52 ′ Almici crosses in the center, the ball that reaches Valente who kicks and hits the goalkeeper Mengoni at the exit, the ball remains there faster to arrive is Santana, who kicks and hits Ciotti who sends for a corner. The intensity of the match seems to increase. Palermo in the 58th minute tries to restart with Santana, but the rosanero captain is stopped irregularly by Pugliese. Hosts to create dangers. Valente at 60 ‘in the center of the rosanero area, Mahrous escapes and sends for the corner.

The Sicilians push with the Vibonese holed up in their own half. De Rose tries from outside the box in the 63rd minute, his conclusion is weak and Mengoni blocks without problems. The Vibonese at 67 ′ starts again in a three against two arriving in the Palermo area, with the ball that is unloaded from Statella for Spina, but Accardi intervenes in a slip and stops the opponents who could have found themselves in front of Pelagotti.

Free kick for Vibonese in the 79th minute, Palermo manages to sweep with De Rose and reopens with Floriano reaching the edge of the opponent’s area. Ciotti has to resort to bad manners to stop him and is cautioned.

Accardi reaches the bottom and crosses for Rauti who arrives with his head, but is uncoordinated and the defense takes refuge in a corner kick. Floriano close to scoring for Palermo. Kanoute in the 88th minute serves Floriano who kicks into an empty net and Mengoni makes a real miracle to stop him.